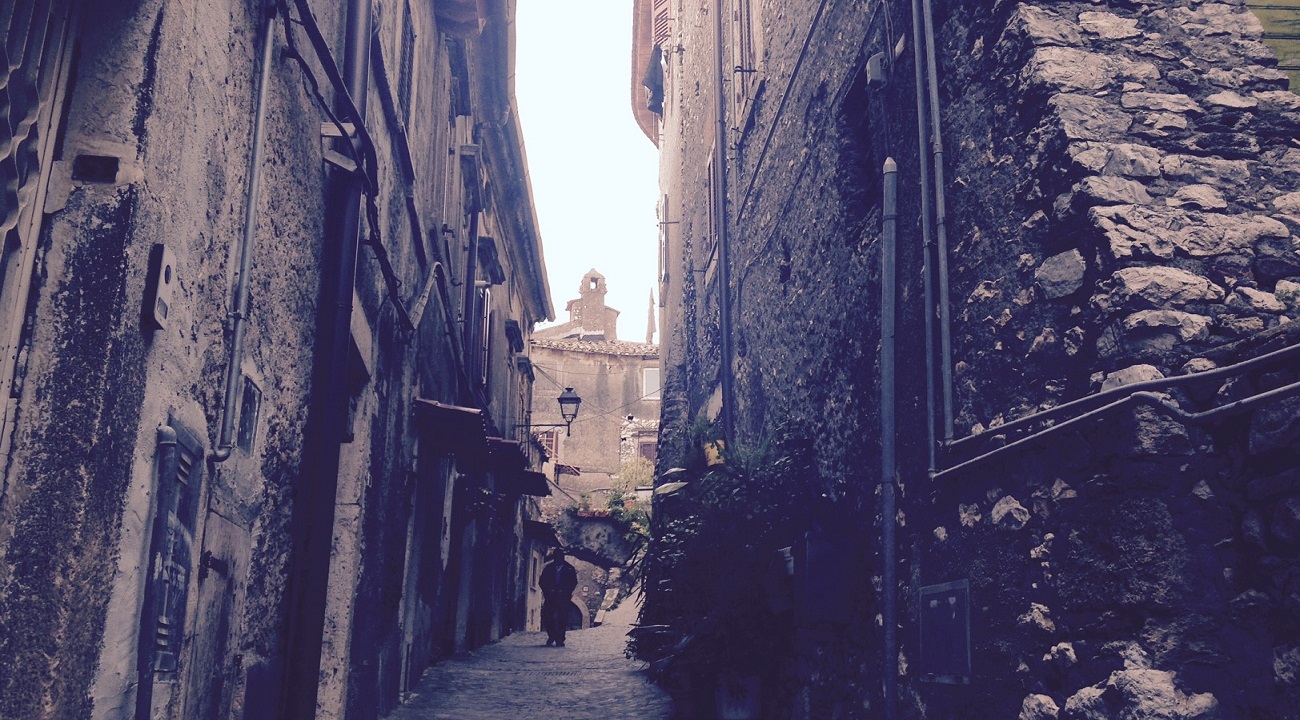 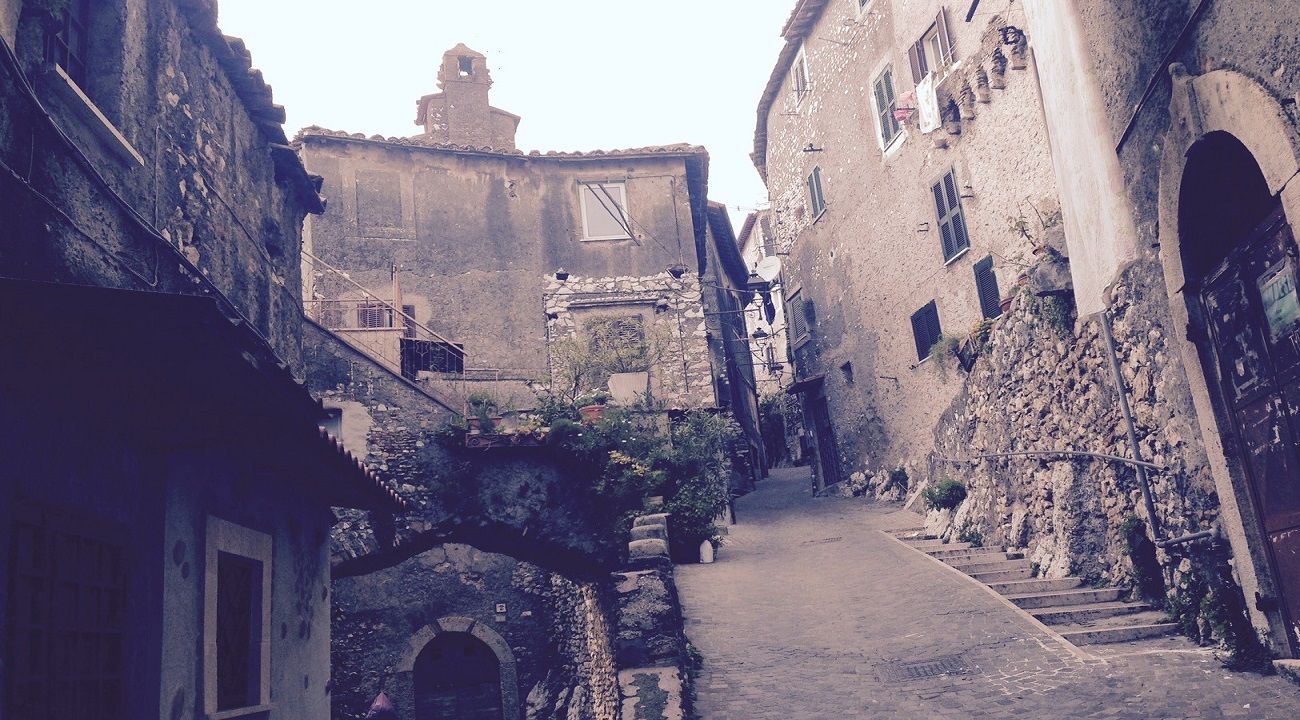 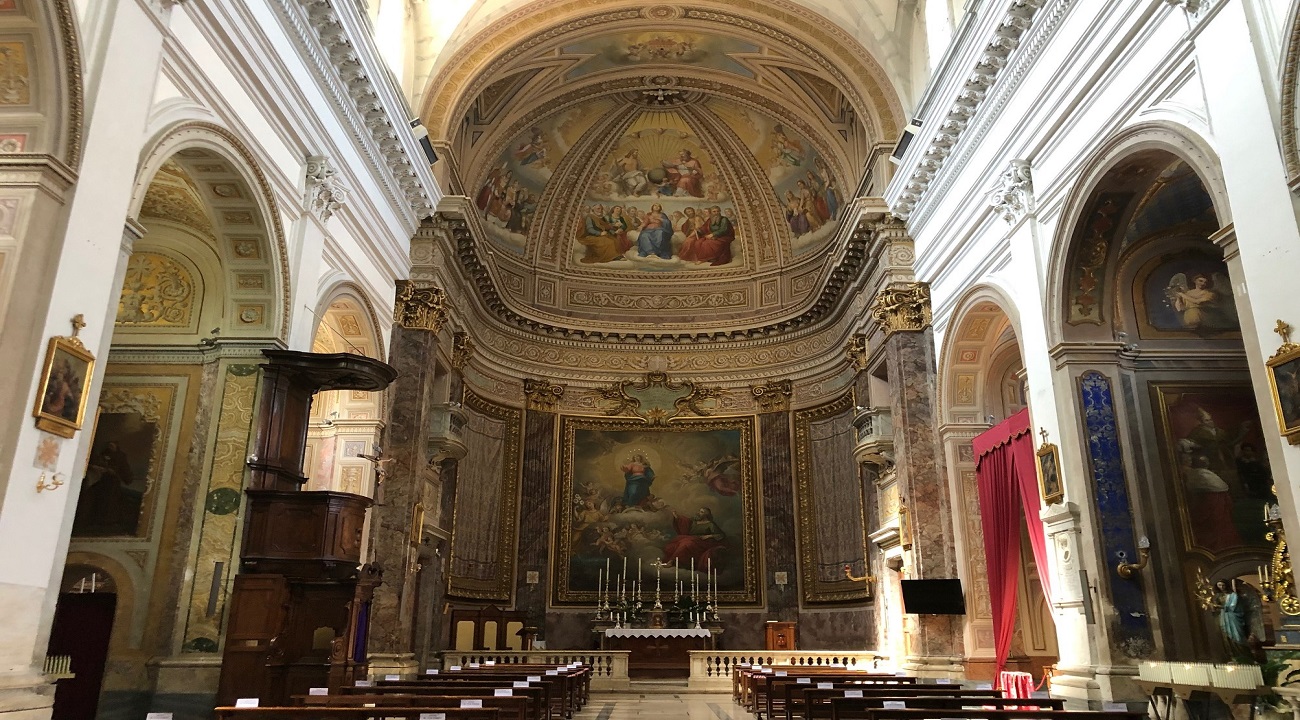 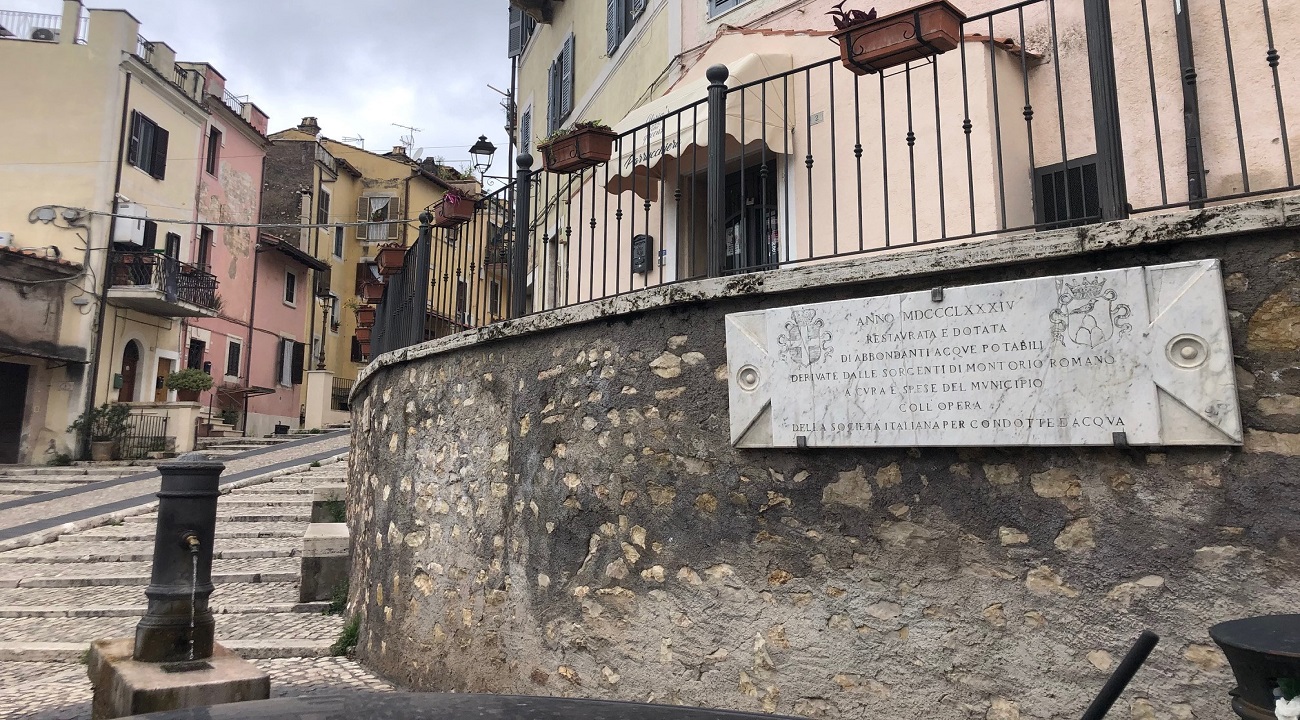 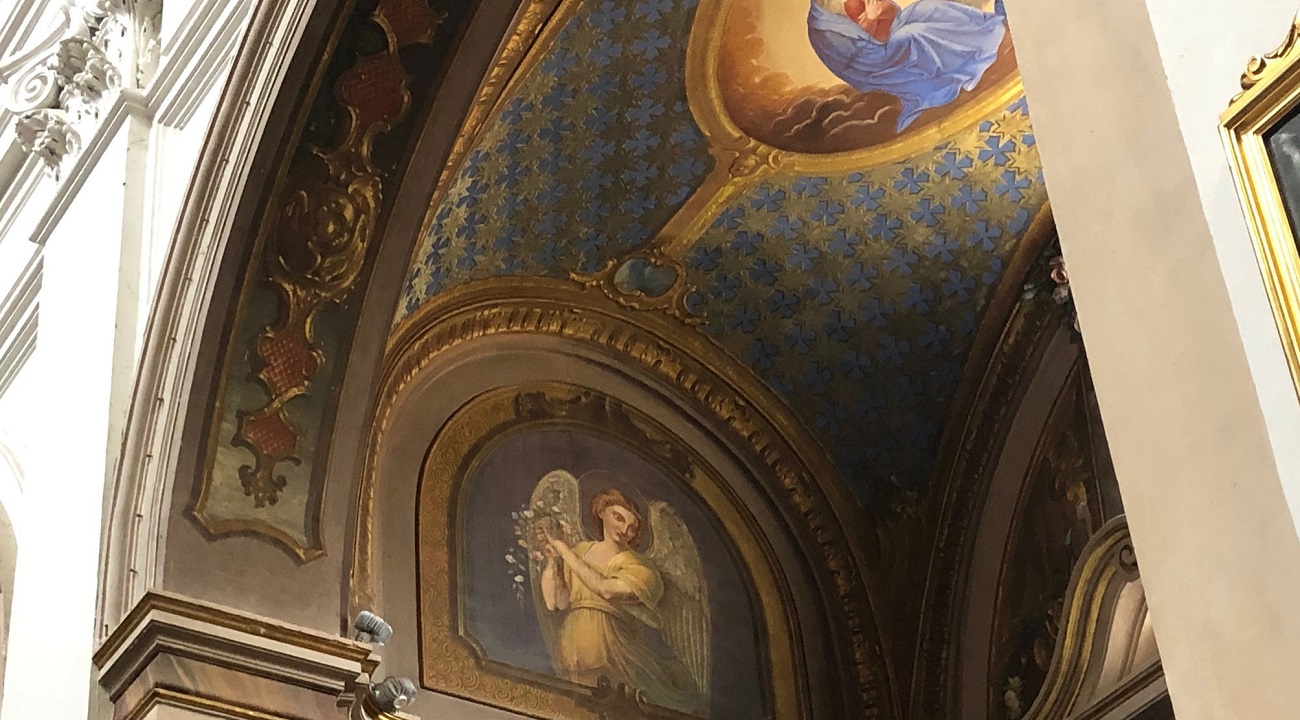 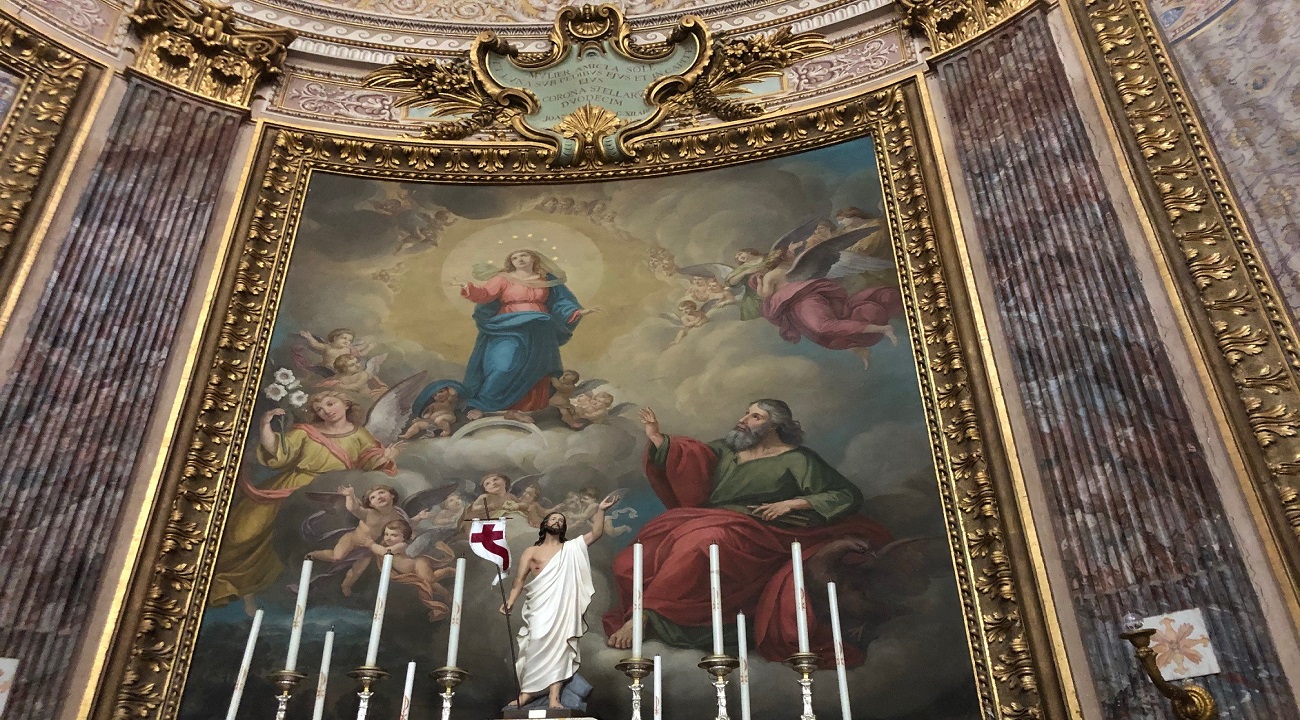 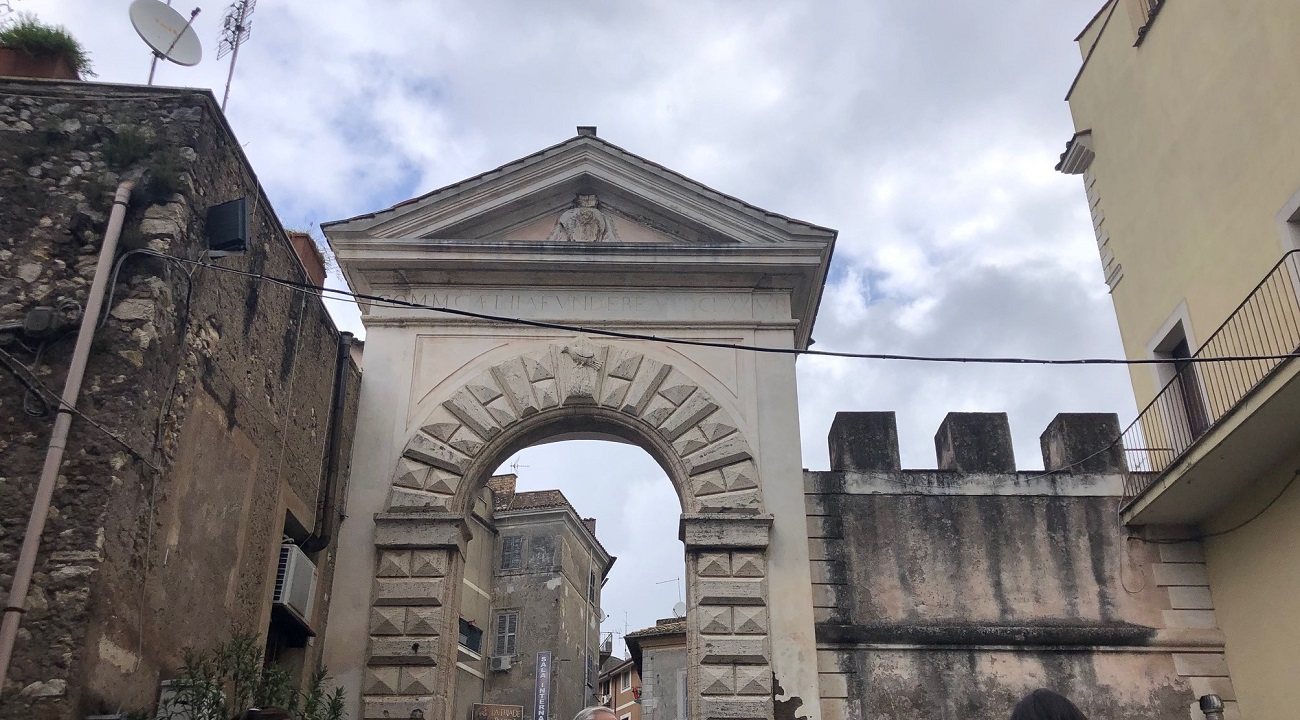 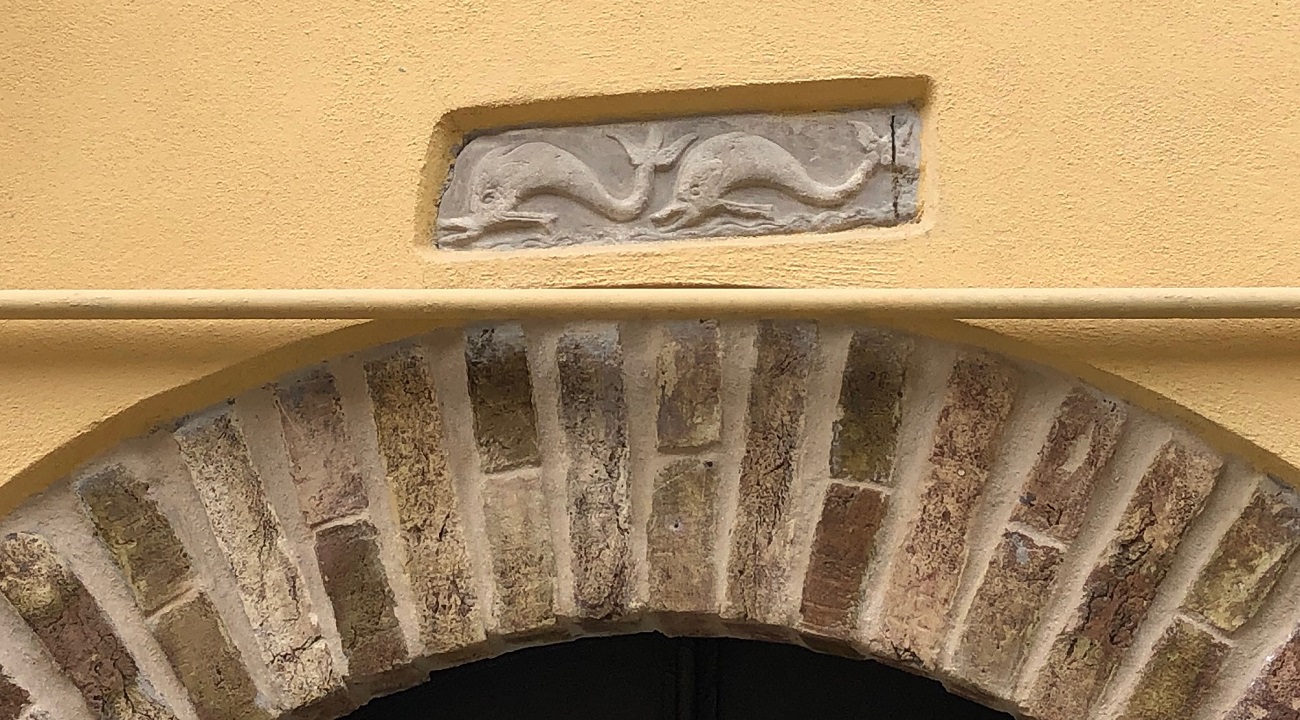 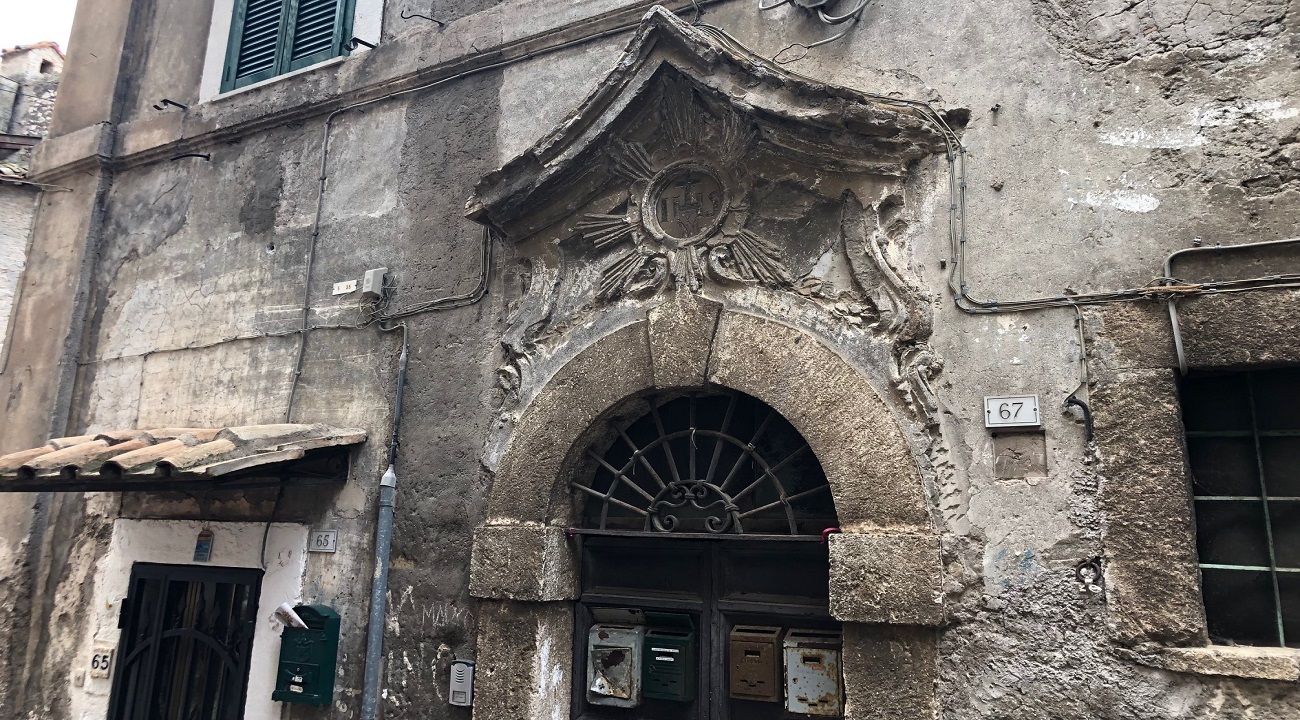 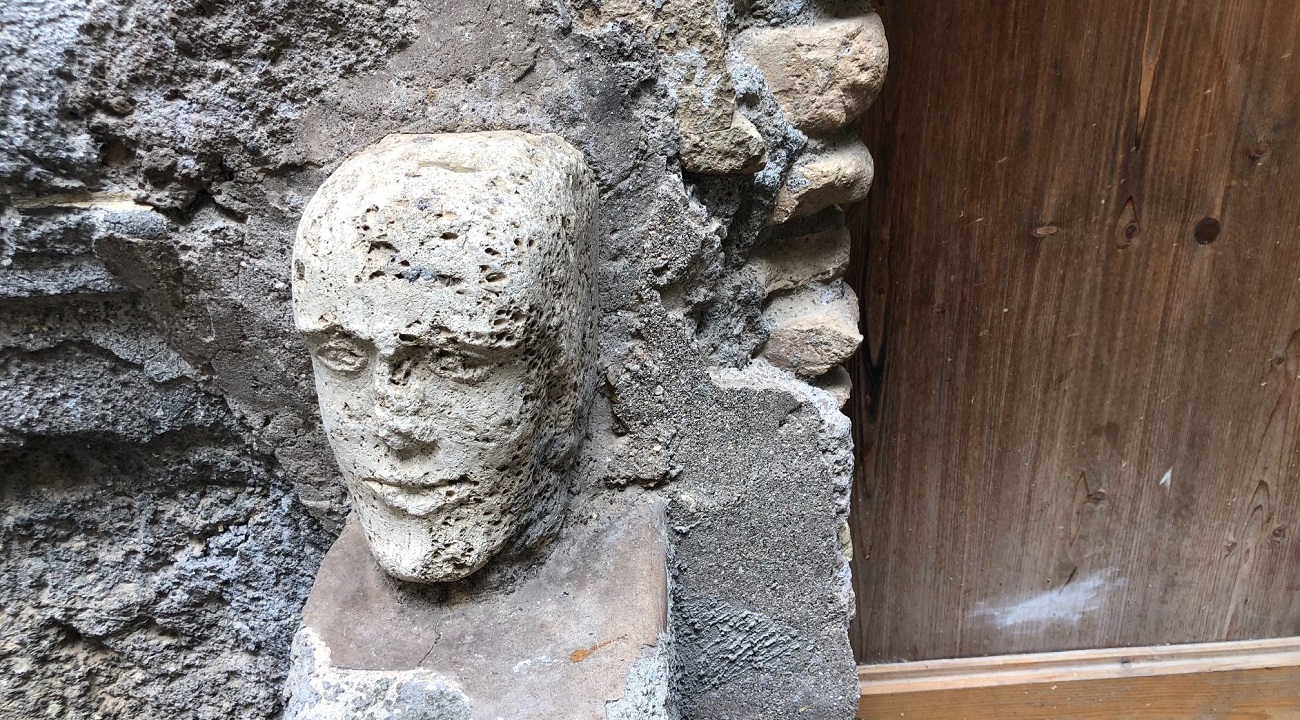 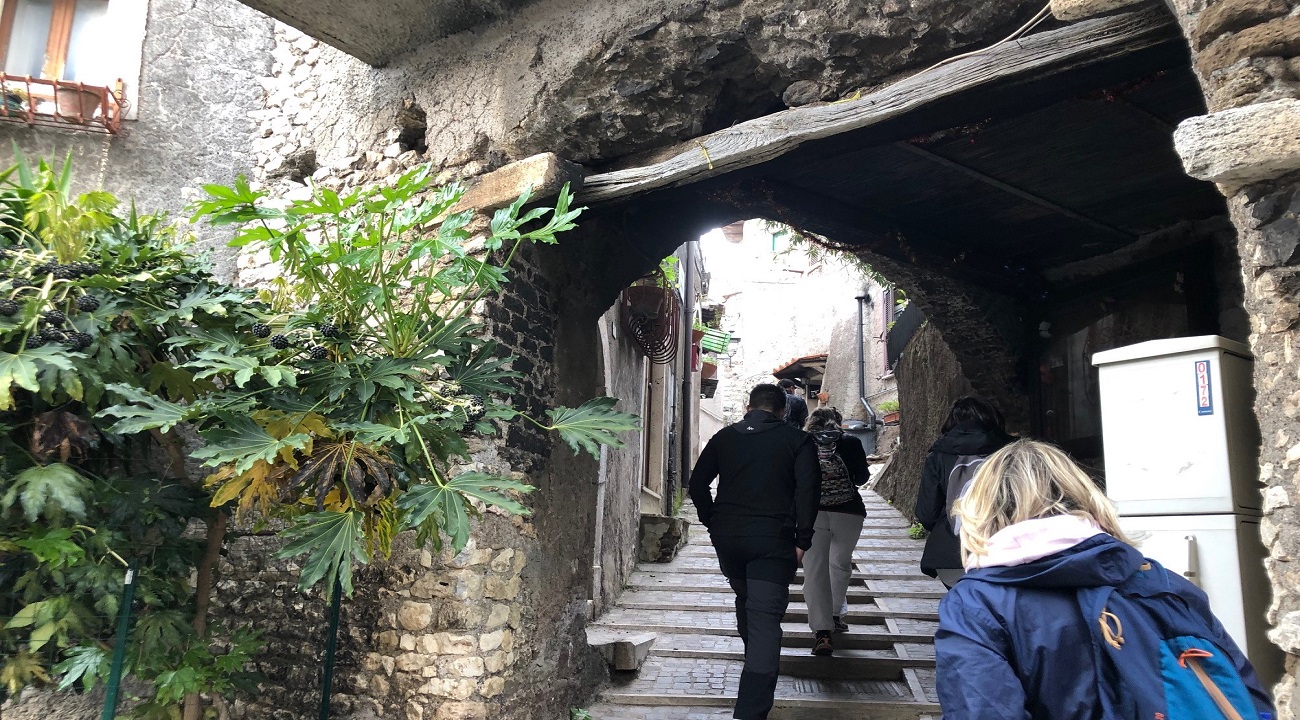 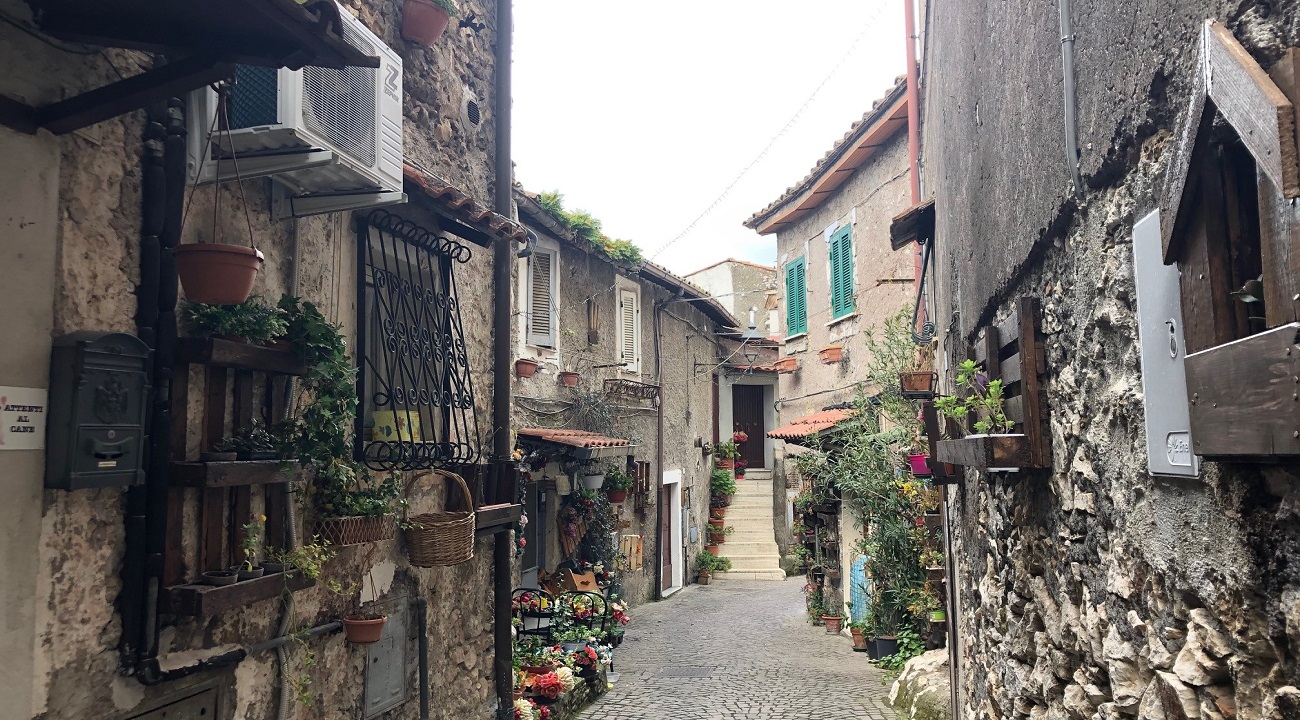 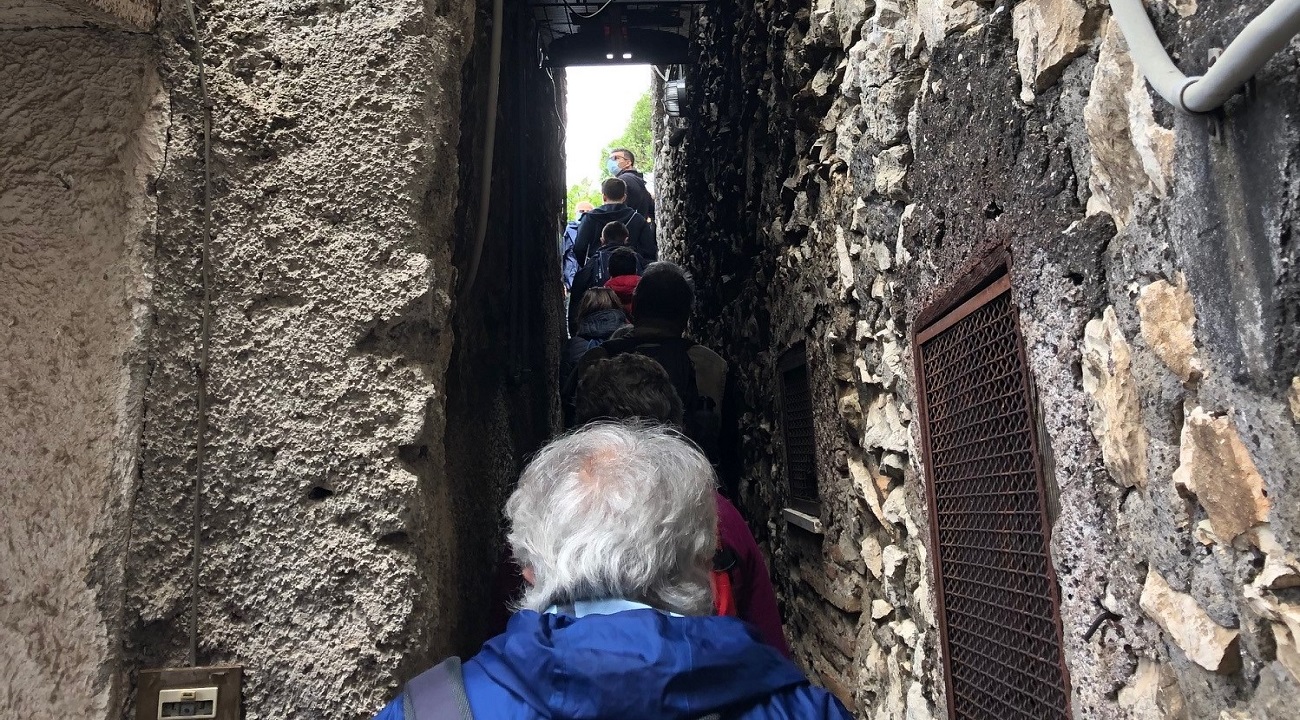 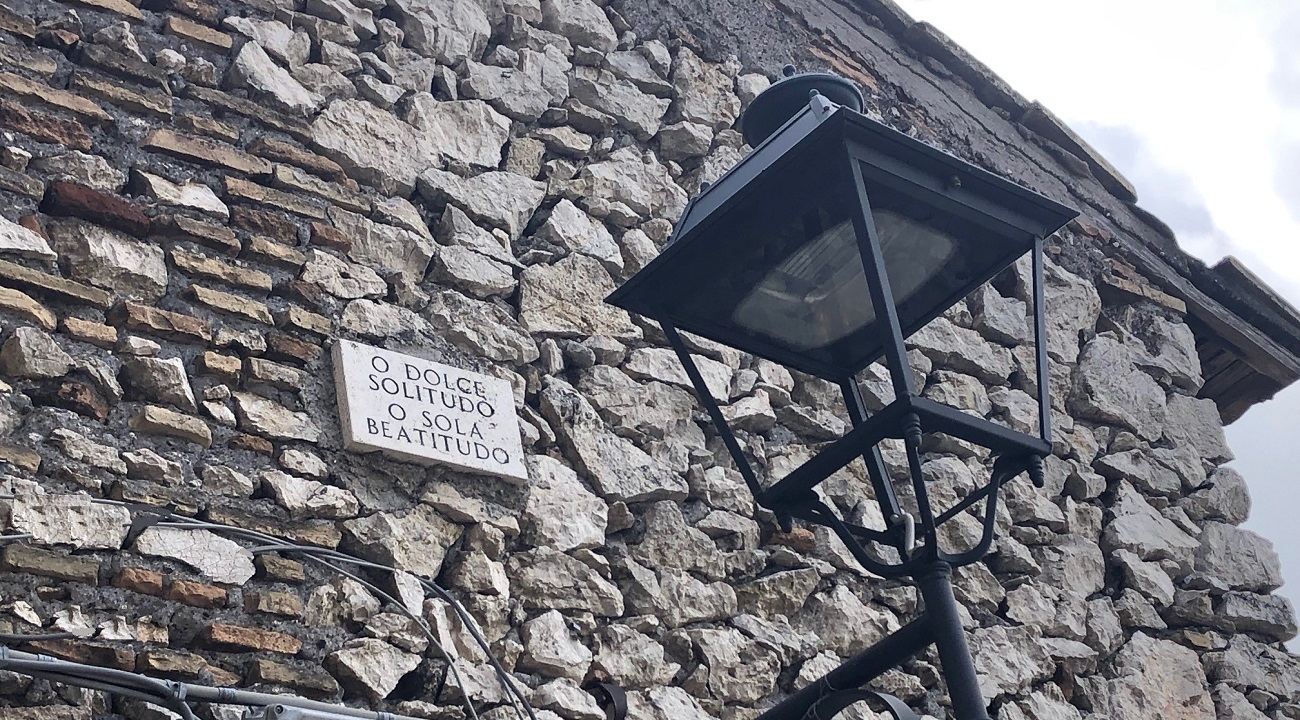 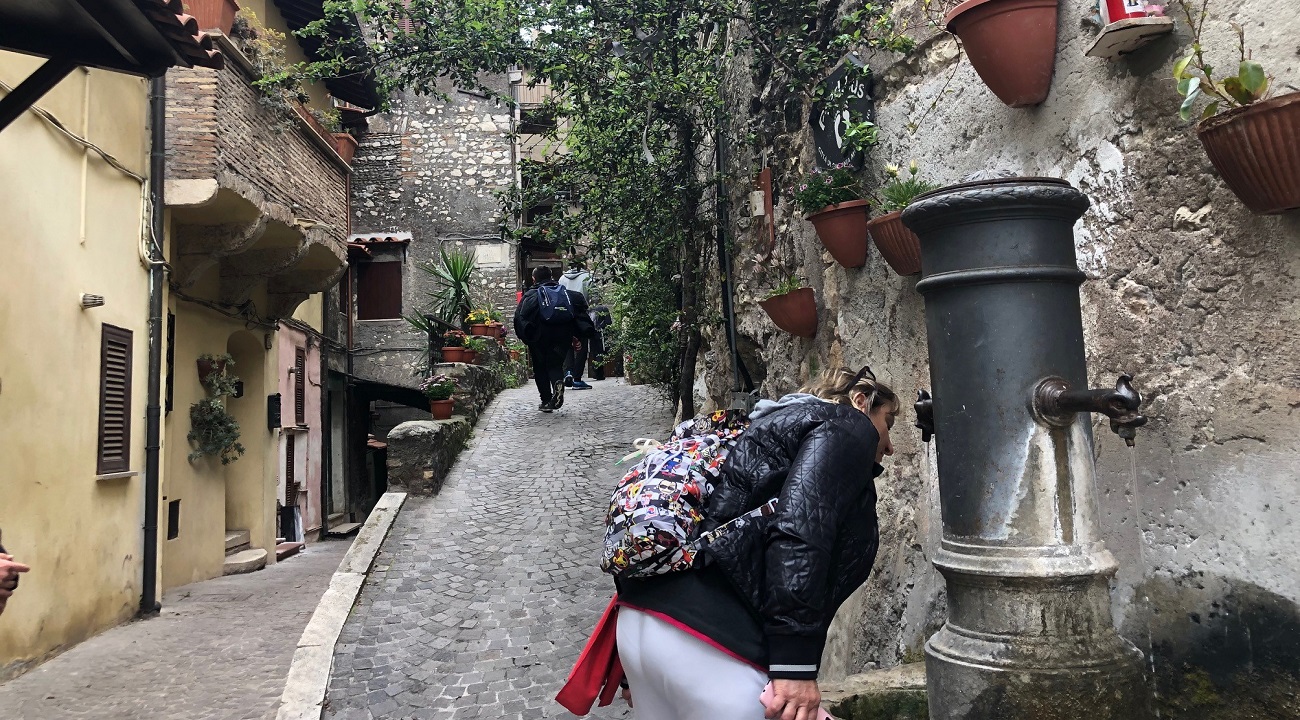 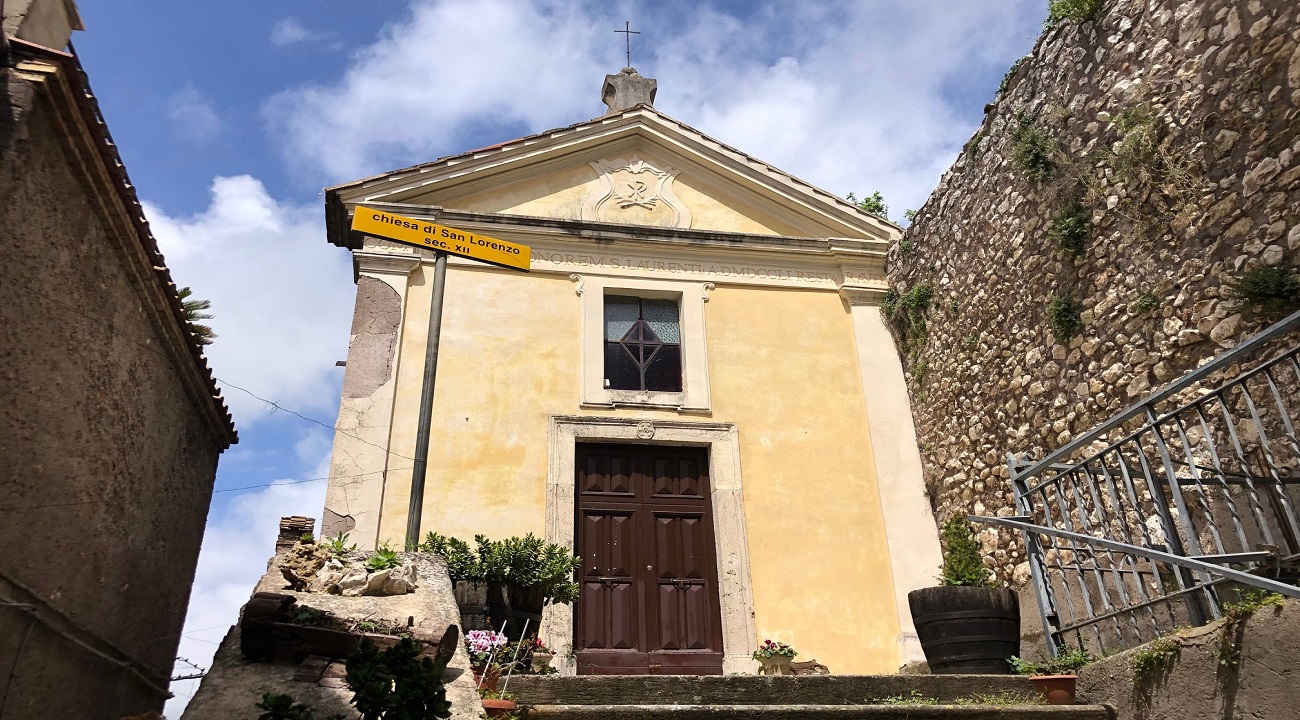 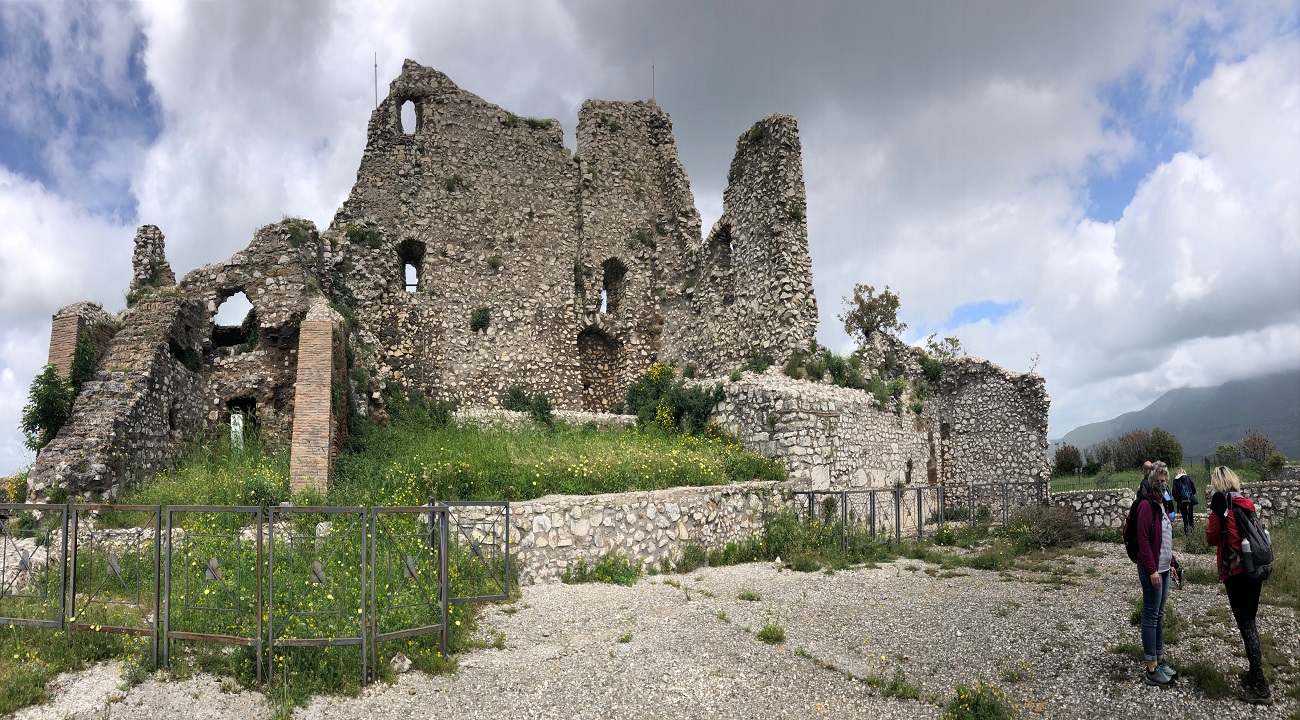 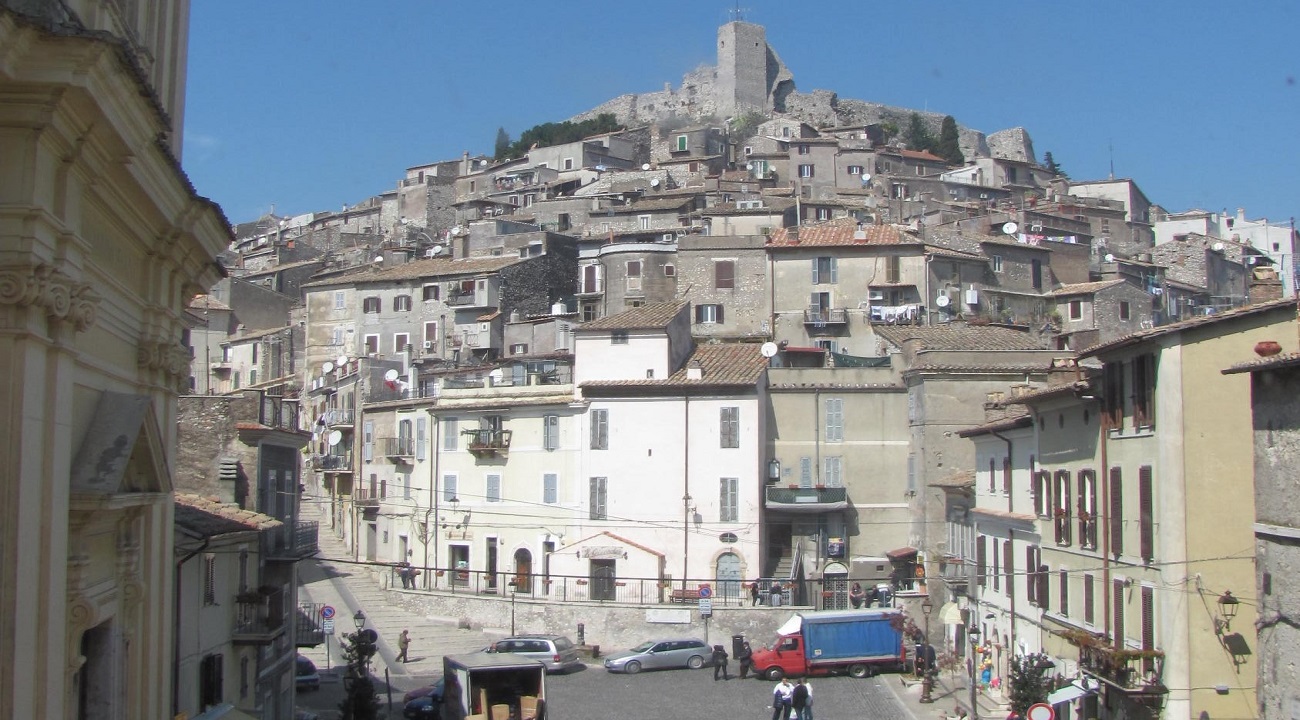 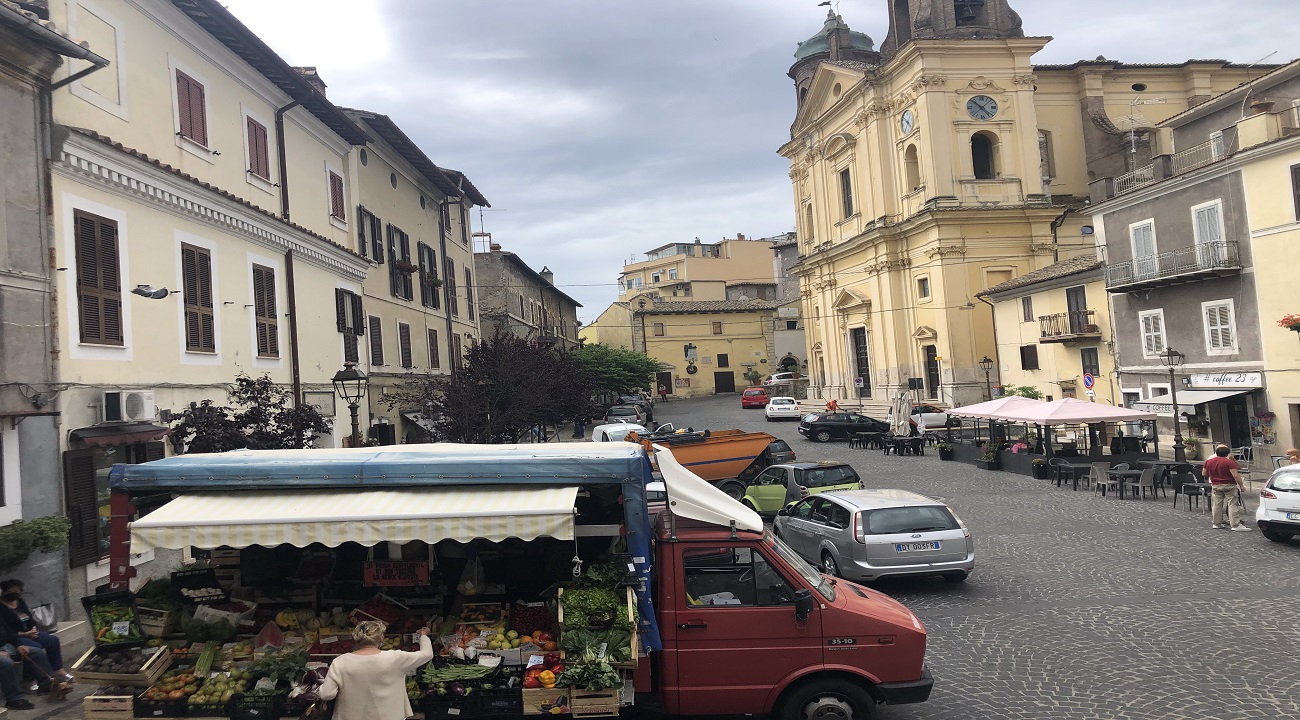 Montecelio village, a casket of history and traditions

The tower-houses that make up the stone village, the archaeological museum with the unique piece in the world of the Capitoline Triad, the churches rich in works of art, the Rocca that alone summarizes a thousand years of history, the very lively popular traditions. All this makes Montecelio one of the most intense tales of ancient and modern Lazio. We are in the Cornicolani Mountains just 30 kilometers from the Colosseum and the Imperial Forums. Montecelio was formerly connected to Rome by the Cornicolana road, whose stone paving, which retains the scratches of chariots’s wheels, still appears in different points of the plain at the foot of the town, even in the midst of the many inhabited centers of the modern city, Guidonia Montecelio . One of the most evocative stretches runs under the church of Santa Maria, in Setteville, giving rise to a very original museum.

The soul of the town in Piazza San Giovanni

The village of Montecelio welcomes tourists in Piazza San Giovanni, for a coffee and to taste the soul of the village and its lively everyday life. From here all the itineraries unfold. This is where the guides give an appointment. While waiting, sitting at a bar table serves to grasp the uniqueness of the country. The cluster houses, which rise in the background as if supported by invisible threads dropped from the sky, the colors of normal days chained one behind the other since before Rome was born, the music of the dialect. And the glimpses of the cinema that has often chosen this square as a set.

The first stop is the church of San Giovanni which opens onto the square. Made in the late Baroque style at the end of the 17th century, it was consecrated in 1710. It preserves many paintings, some recovered from other churches. The Assumption of the Virgin and St. John the Evangelist are the work of the Franciscan father Michelangelo Cianti, who enjoyed high artistic consideration. His also other tempera that decorate the chapels. In the church of San Giovanni, the works of Ludovico Stern and Giuseppe Cades, well-known painters of the Roman Baroque school, stand out. The Education of the Virgin, San Luigi Gonzaga, San Nicola di Bari and Santa Cecilia are signed by Stern with all the elements of the artist’s strength: soft light, transparencies, decorative details such as flowers, gems and furnishings. Two valuable canvases dated 1790 are by Cades: the Invention of the Cross and St. Bonaventure, but also the painting depicting St. Francis and St. Anthony, once placed on the altar of Santa Maria Nuova, another church in Montecelio now in ruins. While a wooden statue of the Immaculate Madonna, a work of the Neapolitan school of the early 1600s, comes from the old church of San Giovanni. Also noteworthy is the sepulchral monument of Don Carlo Rusconi, a geologist and paleontologist from Montecelio from the 19th century, author of important discoveries.

In the heart of the town through via Servio Tullio

Leaving the church, head towards the Rocca. From the square, go up via Servio Tullio, one of the most characteristic streets of the village named after the sixth King of Rome who, according to legend, was born towards the end of the 4th century BC. C. from the slave Ocresia in today’s Montecelio, anciently Corniculum. You have to go through alleys and stairways to reach the Rocca. A slow climb, between unique and particular views that stand out from every corner. Decorations and artifacts, probably coming from archaeological sites in the area, are often set between the stone walls of the houses. And it is on this path that the church of San Lorenzo is located, the oldest in the country.

The Rocca, at the top of the village of Montecelio, is by itself a concentrate of history: the original nucleus, dating back to around the sixth century BC, also includes the remains of a Roman temple of the first century, all incorporated into the built fortress by the Crescenzi di Sabina around the year 1000. From here you can enjoy a 360 degree view up to Rome, with your gaze crossing what was once the Roman countryside. With the help of a guide, almost like on a map, it is possible to get an idea of ​​the route of the ancient Tiburtina and the Cornicolana in a plain that at the time was teeming with activities and rustic-residential villas, the Roman travertine quarries , the famous Villa of the Emperor Hadrian up to Tivoli where the Temple of Hercules Victor stands out. On the horizon the skyline of the city Caput mundi and the Castelli Romani.

From the Rocca to Monte Albano

From the Rocca you dive once again downhill through the narrow streets to regain Piazza San Giovanni. Then head towards the second hill of the village of Montecelio: Monte Albano on which stands the eighteenth-century monumental complex of San Michele. Another journey through the treasures and secrets of a former Franciscan convent built on the ruins of the Castrum dating back to medieval times and which now houses the Rodolfo Lanciani Archaeological Museum.

The San Michele complex and the jewel church

The frescoes, the jewel church dedicated to San Michele, the refectory with what remains of the representation of the Last Supper and a “reader” madonna who turns abruptly when the Angel painted on the other wall arrives. Just a few ideas for another exciting visit among the thousand stories of Montecelio. Do not miss the 24 lunettes that represent the most important episodes in the life of St. Francis. They are accompanied by triplets in kissed rhymes and each bears the coat of arms of the sponsoring family of the time. A rarity. There are very few examples of the same type in Italy. The adjoining church dedicated to San Michele Arcangelo, built in the eighteenth century in neo-baroque style on the ruins of an older one, has returned to shine after more than twenty years of restoration: to admire the nineteenth-century frescoes by the painter Michelangelo Cianti, on the altar a copy of the Archangel Michael by Guido Reni made by Giovanni Battista da Roma in 1740. Two more large murals in the tribune (the apotheosis of San Francesco and the approval of the Franciscan rule by Innocent III), the decorations of the chapels, the ceiling of the nave with the panel of the Assumption of the Virgin.

The “Garden of the Friars”

Another enchanting corner of the village is the Giardino dei Frati, which is accessed from the gate near the church of San Michele Arcangelo. A green and ancient oasis to refresh yourself before returning to Piazza San Giovanni for at least two other essential visits.

About 150 meters from Piazza San Giovanni, along Via Santa Maria, passing under the Arch, a monumental 17th century gate, is the ancient public wash house of the village of Montecelio. Until a handful of years ago it was still possible to find housewives doing laundry. Now it has been transformed into a cultural space, but the charm of the huge fountain and the flowing water remain intact. The story of this restoration also tells the stainless verve of the authentic Montecelio’s women: they fought a small “no global” war to oppose the end of washing in the wash house.

The seventeenth-century church of Sant’Antonio Abate

Just outside the town is the seventeenth-century church of Sant’Antonio Abate. The frescoes that adorn the apse of this chapel are considered the most precious of the works of art still preserved in Montecelio. Each of the portions into which the space is divided is occupied by almost life-size figures. In the center is seated on the throne the Madonna nursing the child, while on the two sides are depicted two couples of holy martyrs: on one side Santa Lucia and Santa Liberata, on the other Santa Caterina d’Alessandria and Santa Cecilia. Other frescoes represent Christ and two kneeling angels. The paintings, attributed to the school of Antoniazzo Romano, according to the official dating would have been carried out between the end of the fifteenth and the middle of the sixteenth century. From the early seventeenth century the church was the seat of the Suffrage brotherhood.

The oldest fashion show in the world

Montecelio is also the town of the Vunnelle, the very rich dress of the town’s women’s day that once a year can still be admired in a unique show. It is the oldest fashion show in the world that sees hundreds of Monticellesi wearing the dress handed down as a treasure from mother to daughter for generations. A spectacular procession that accompanies the procession in honor of San Michele Arcangelo. It happens on the last Sunday of September.

Info and how to get there