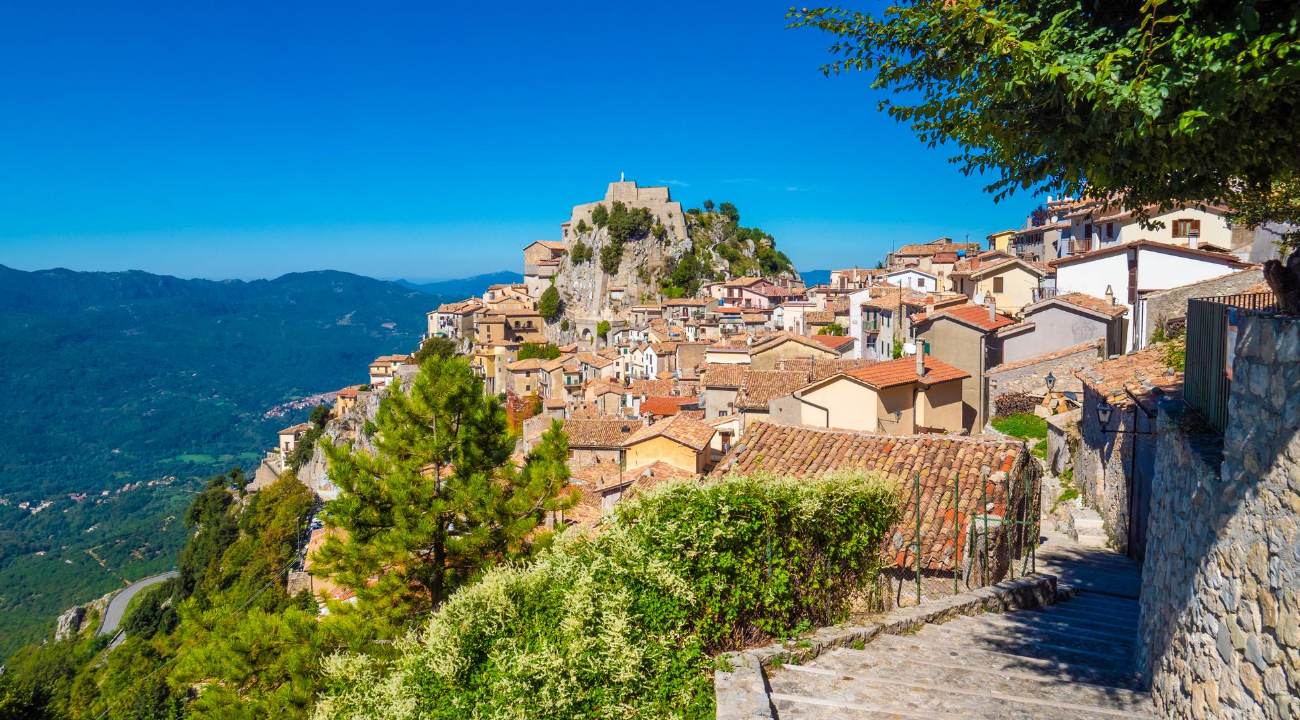 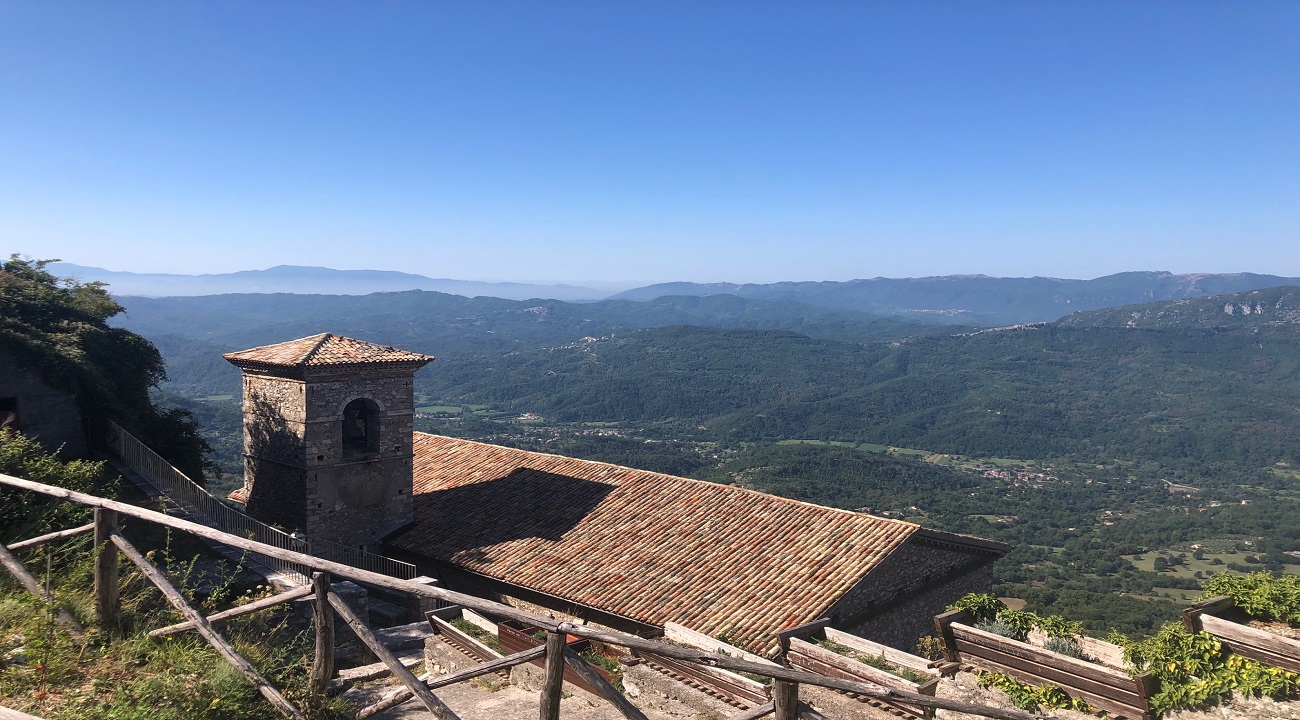 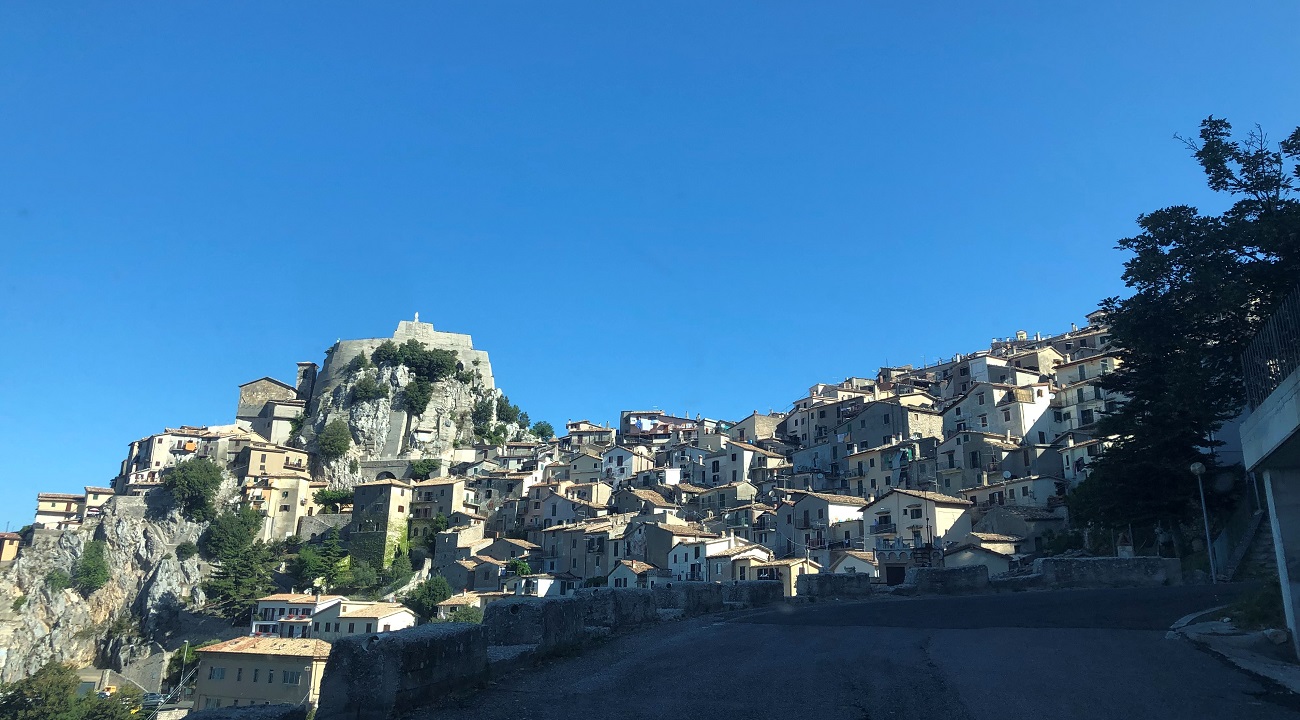 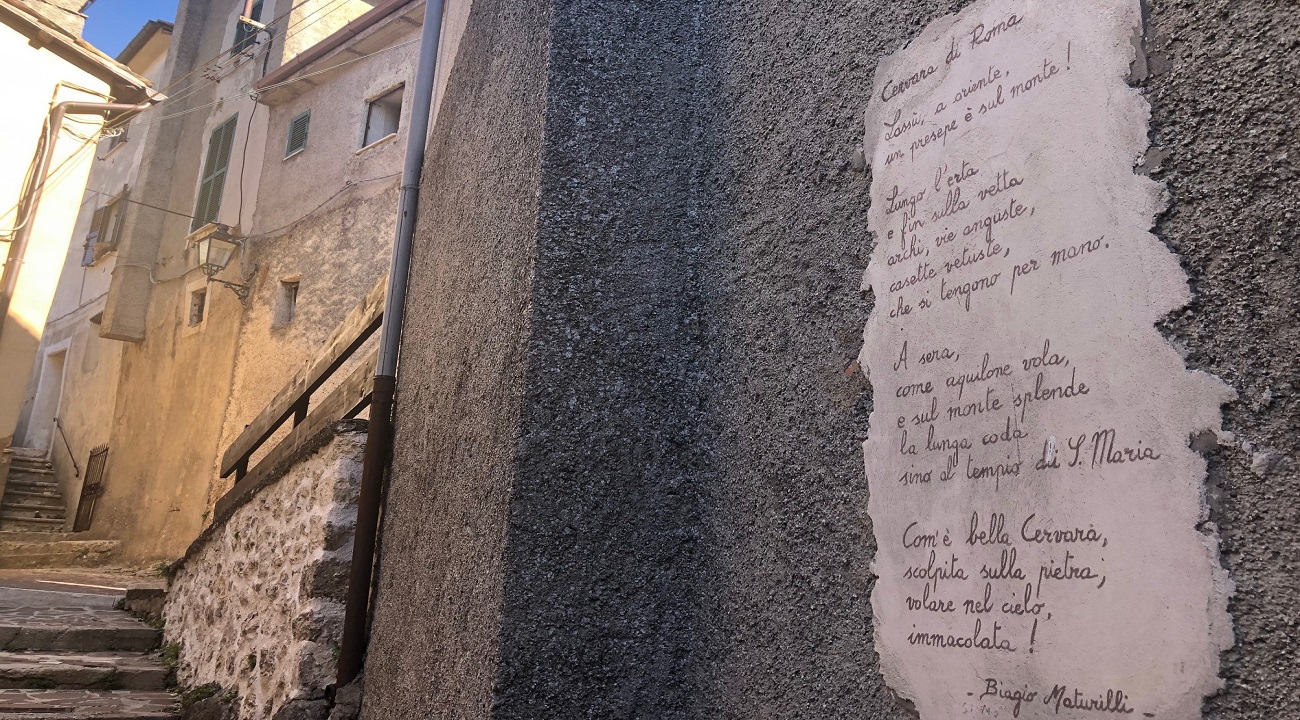 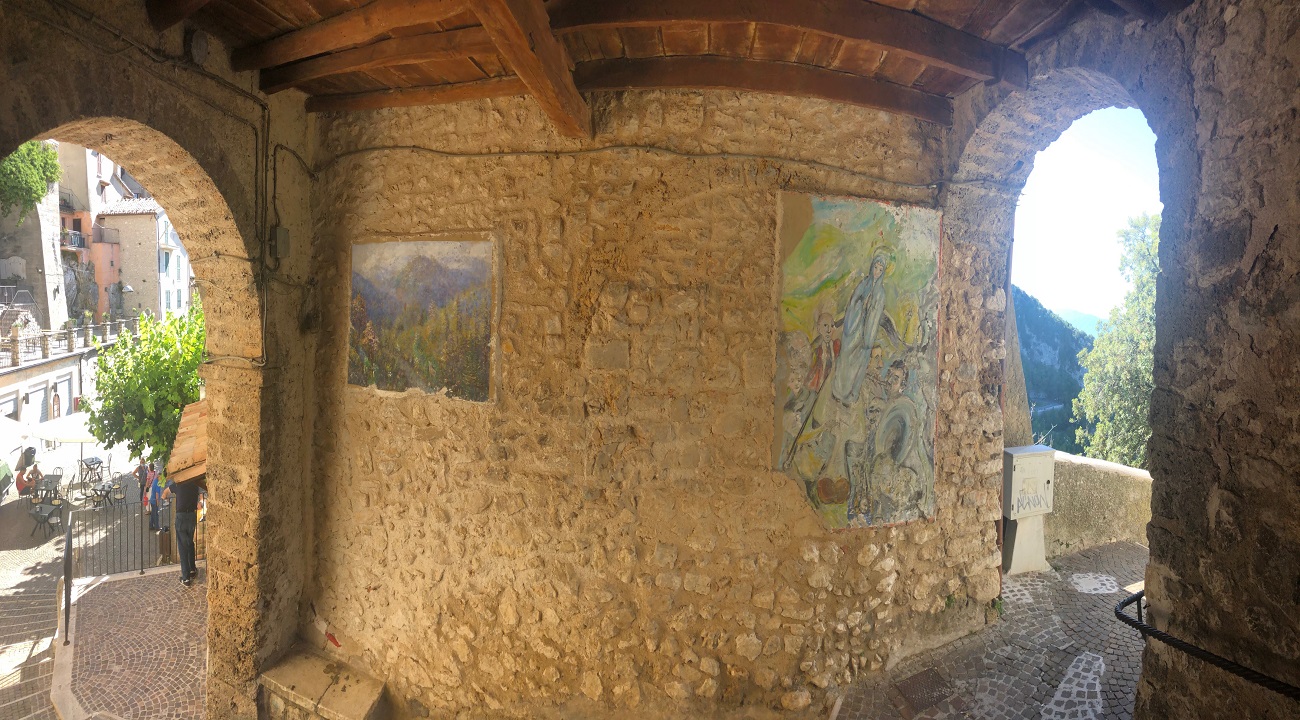 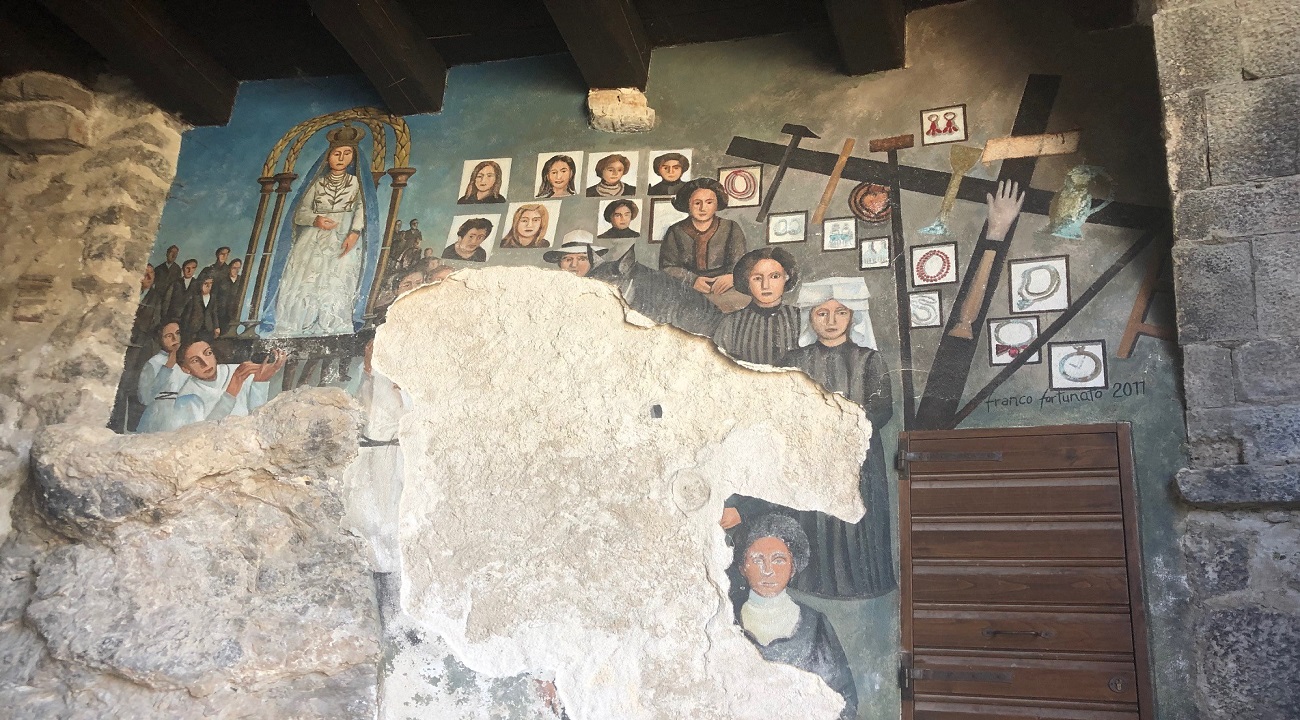 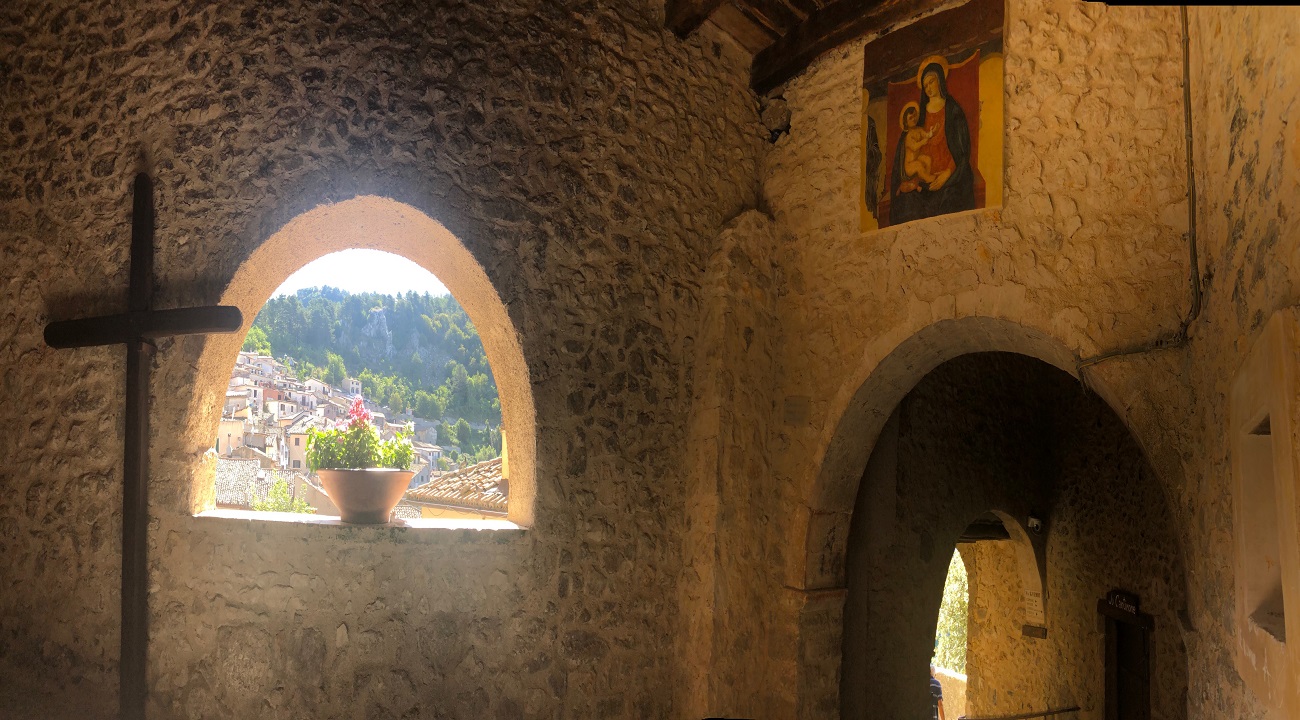 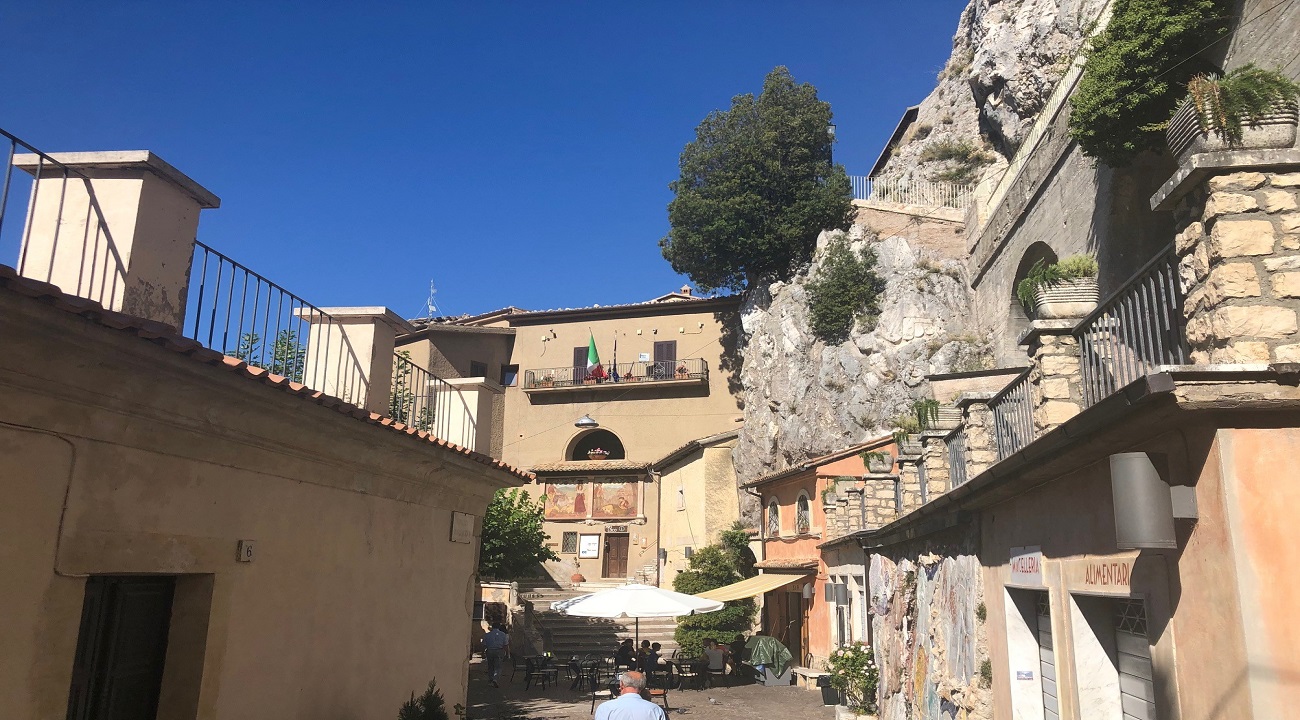 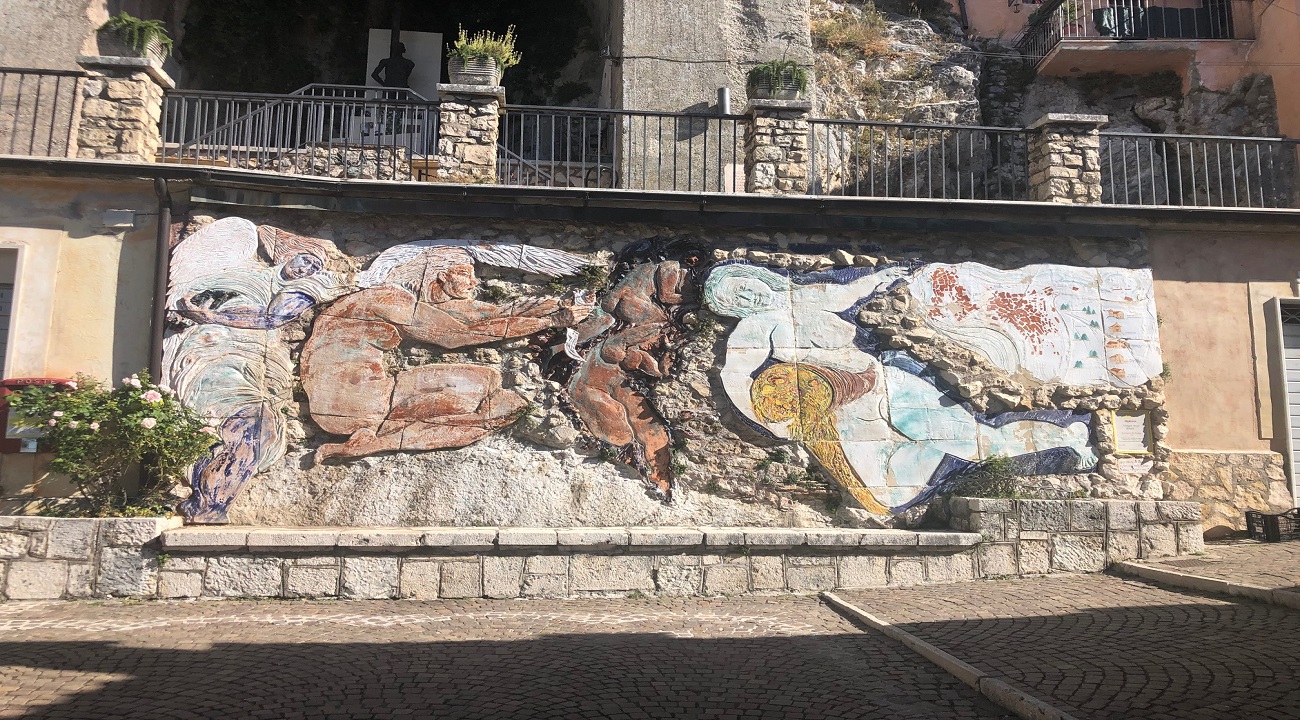 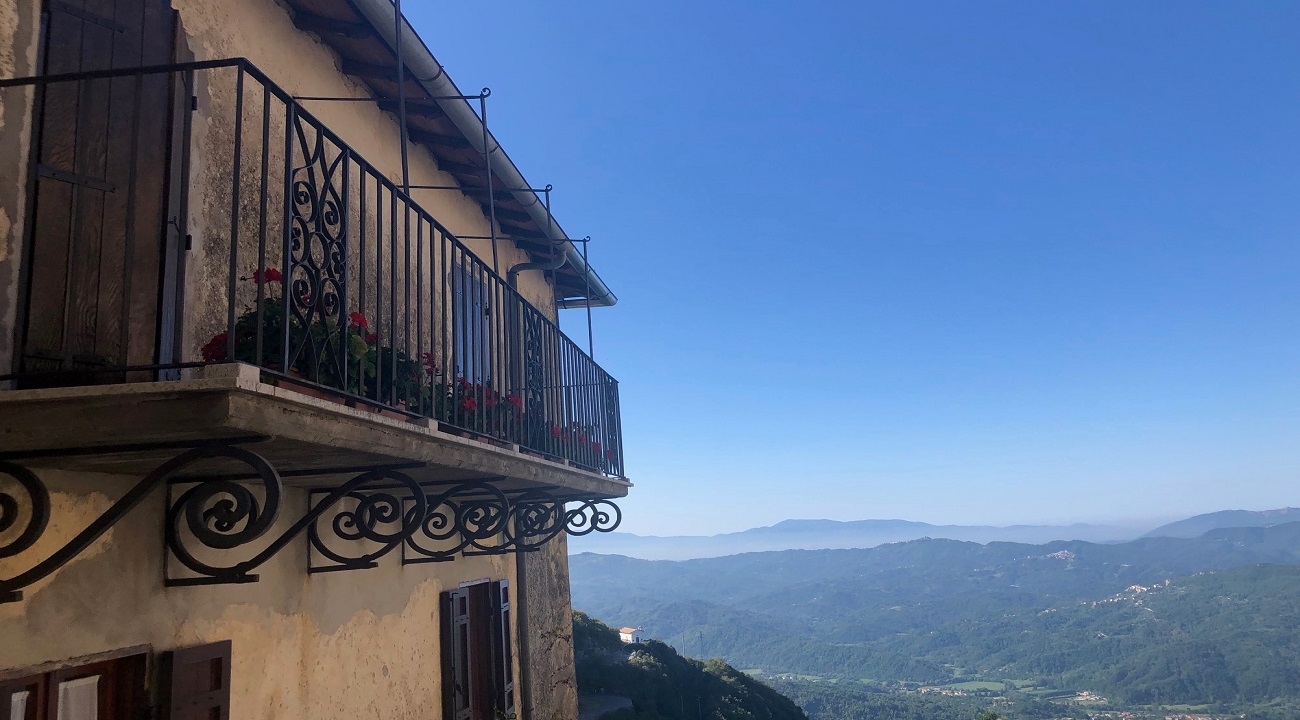 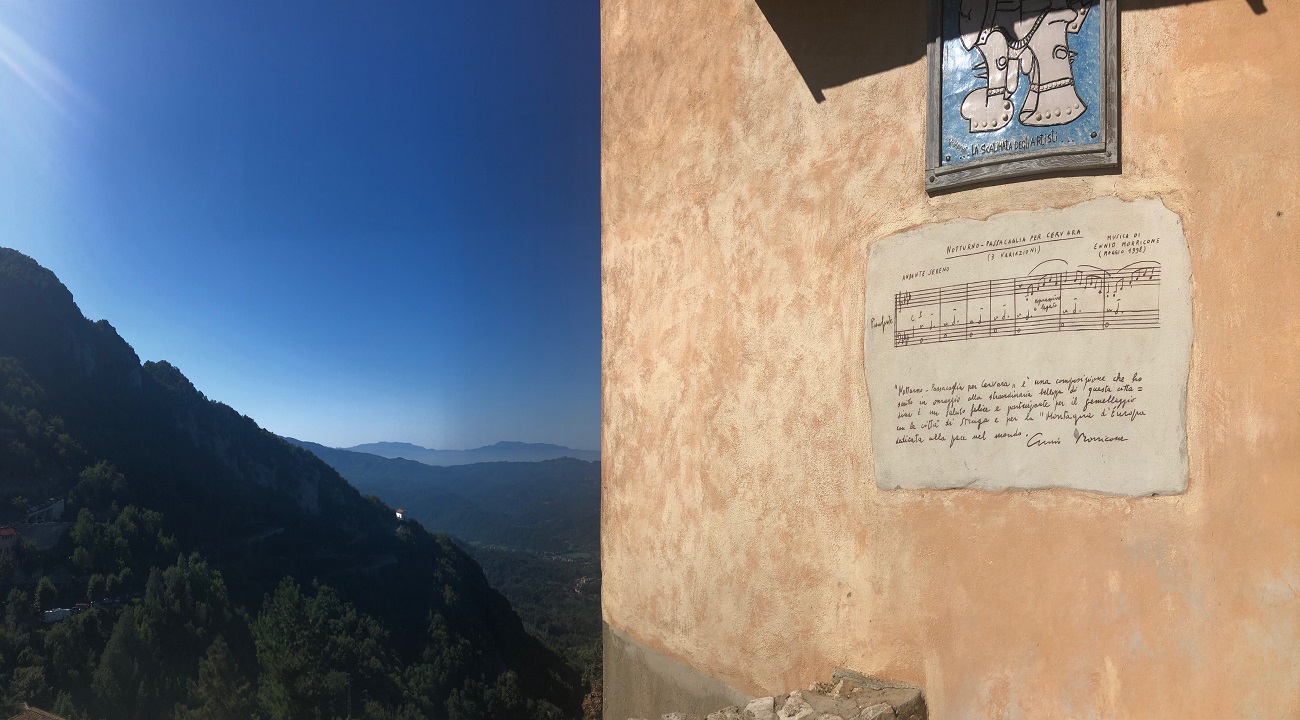 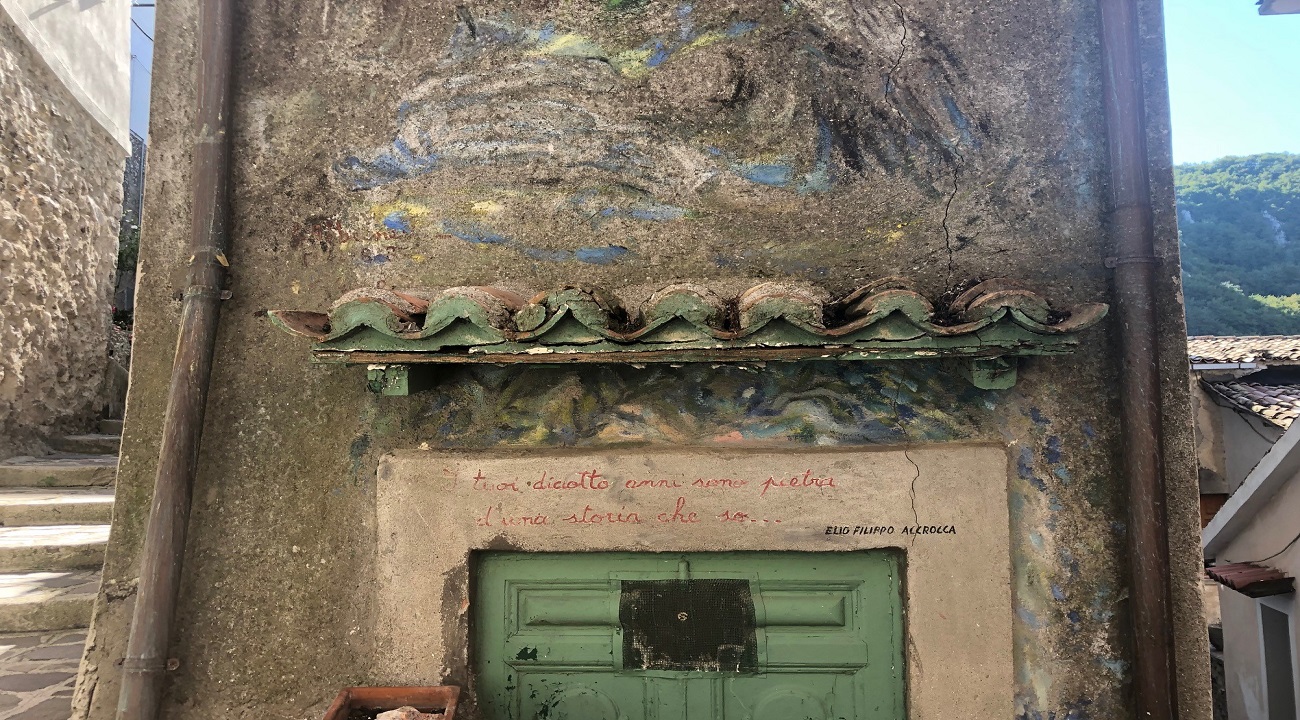 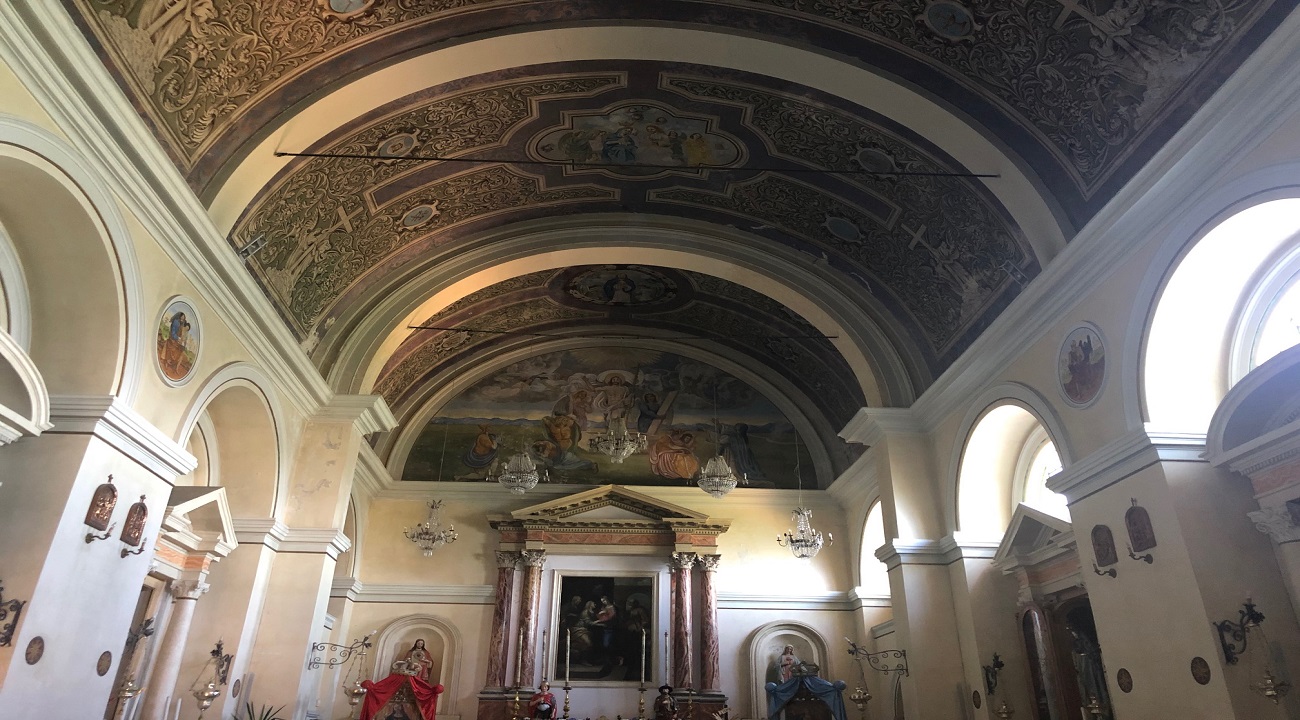 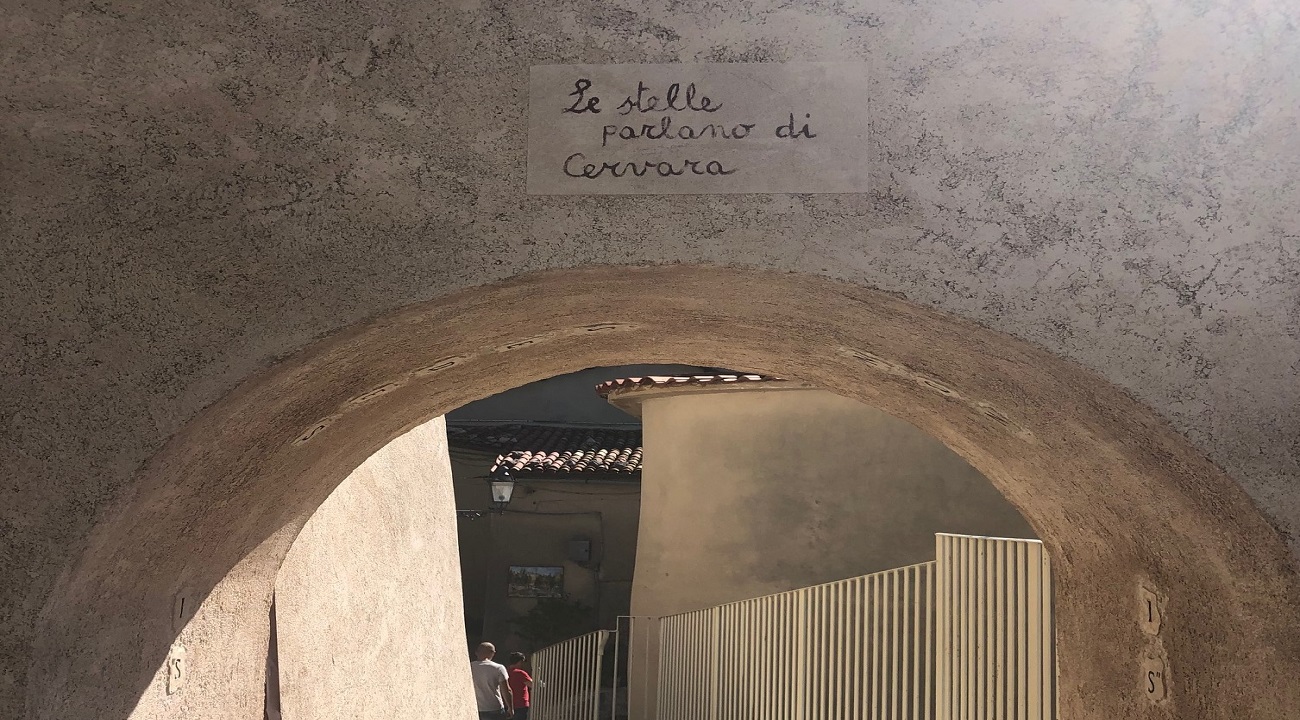 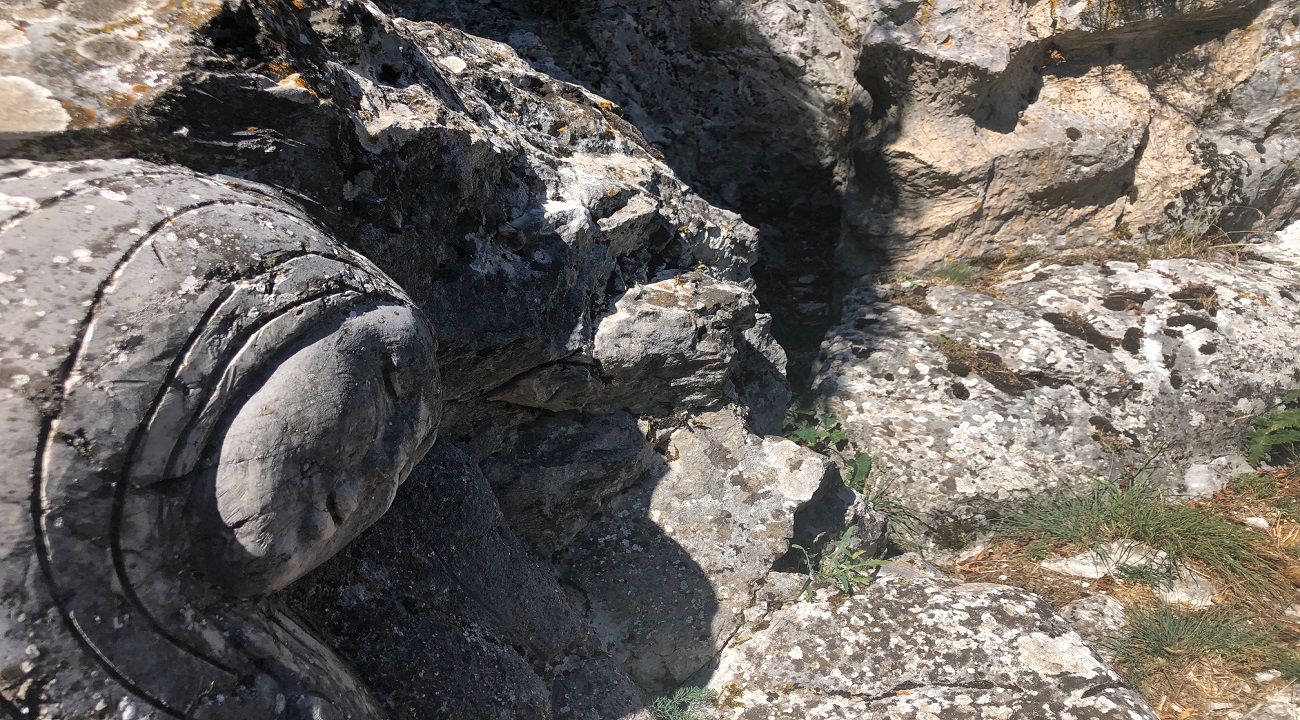 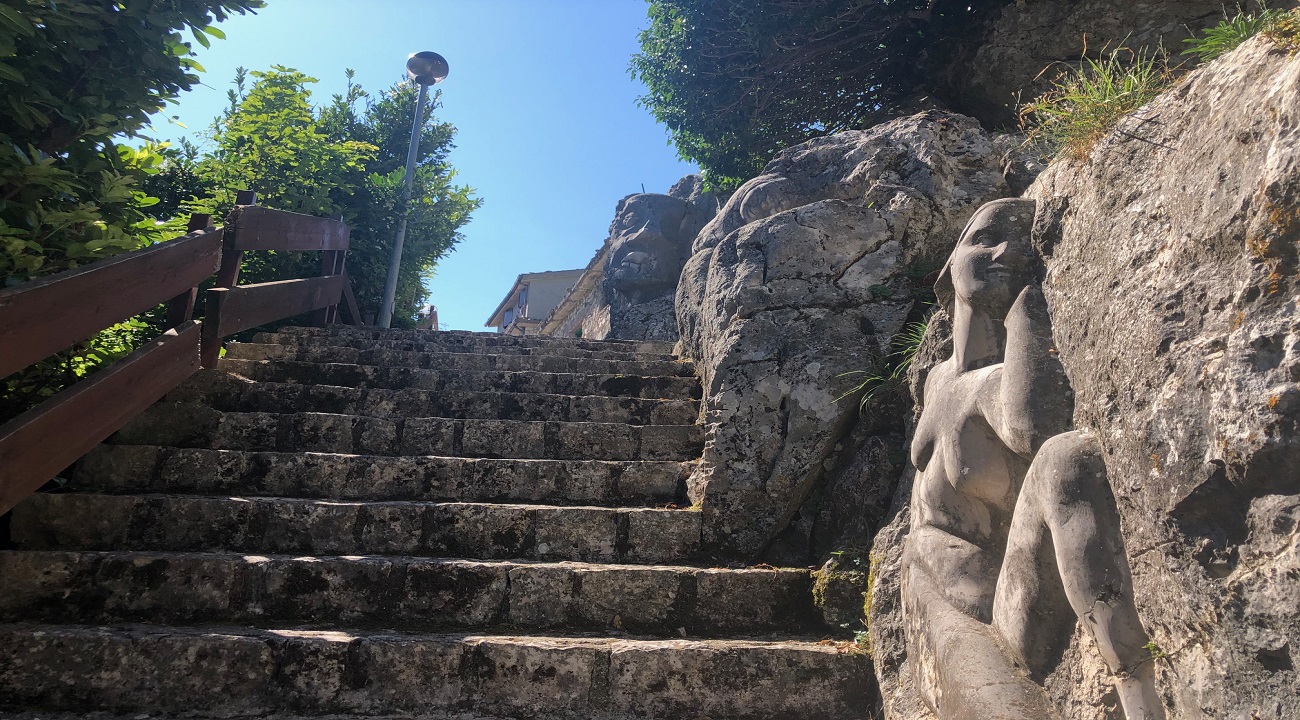 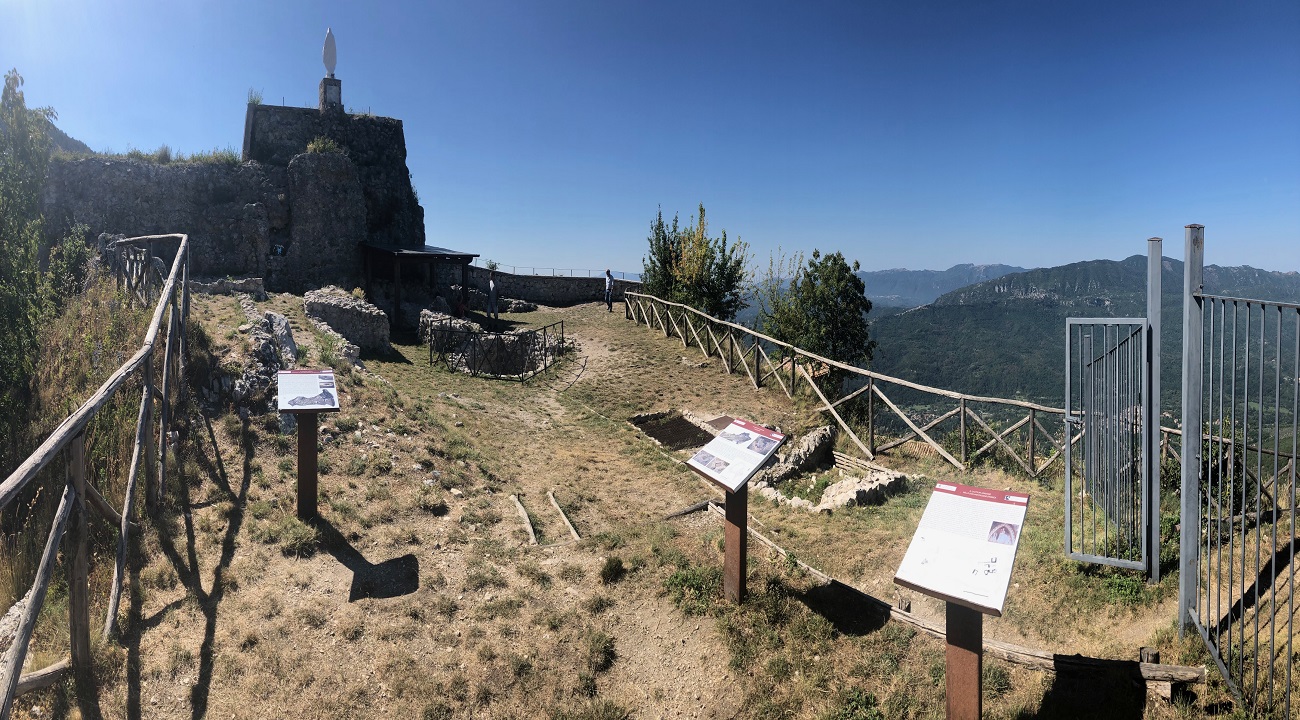 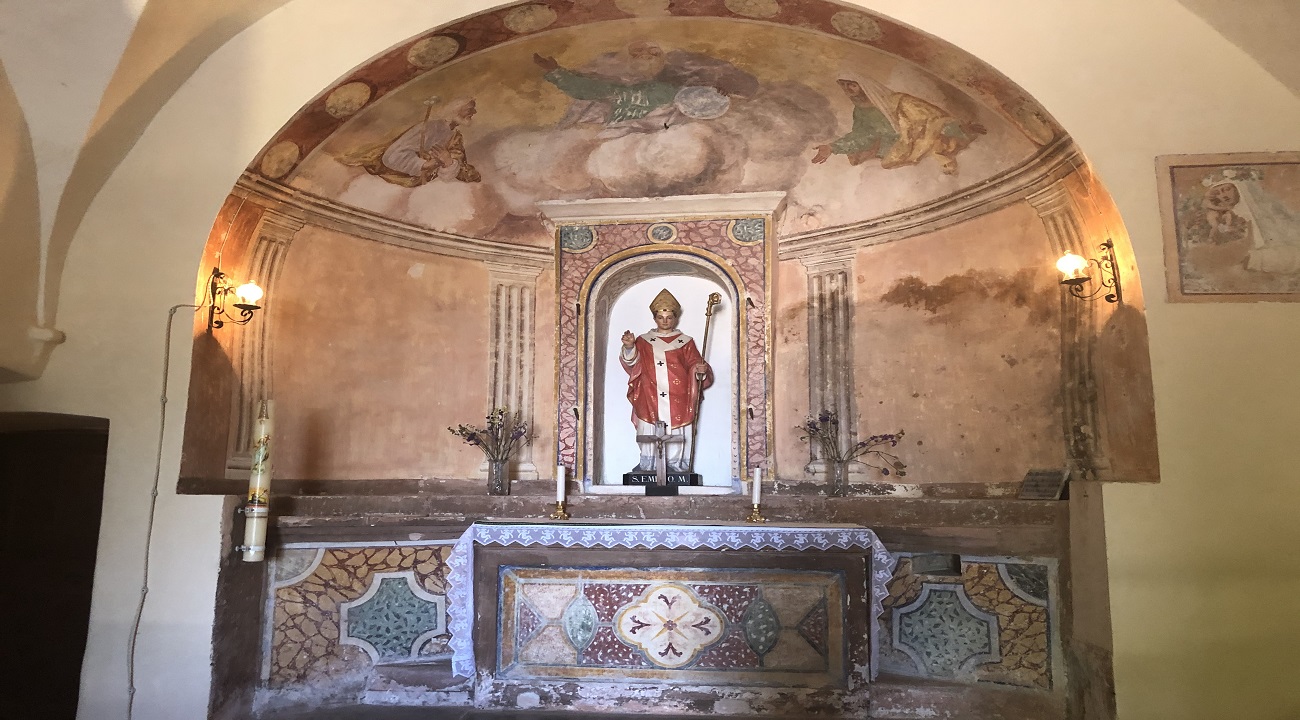 Cervara di Roma, a village that loves the stars

Cervara is a village carved in the rock, discovered and brought to the international spotlight since the 1800s by world-famous poets and artists who have drawn great inspiration from this unique landscape.  Everything is written on the stone in Cervara, the highest village in the province of Rome, which stands at 1,053 meters from the lush nature of the Simbruini Mountains  Not only the streets, alleys and houses are shaped in the stones, but also the first page of a book on peace with images, faces, anthropomorphic figures and feelings.

And still paintings, murals, verses and even the music of Ennio Morricone, the famous composer Oscar winner.   “We have found a place – commented the Master who often stayed in Cervara – where there is great peace, the search for friendship, and where animals live with us in the huts and along the roads. In this beautiful environment, I have often found a source of inspiration for the music that I wrote and that live on this found serenity”. While the great Spanish poet Raphael Alberti described it as “a sculpture in the sky, which would fly to the sky if the air supported it”. In Cervara it is also possible to visit the sky, thanks to the astronomical observatory “Claudio del Sole”.  Cervara di Roma is a small miracle: the magic of nature that blends with art in a continuous exchange with the soul and popular traditions.

The “Mountain of Peace” dominates the Aniene Valley

It was a research laboratory for the sculptor Vincenzo Bianchi who, together with his students from the Academy of Fine Arts in Florence, in 1984 started to create the travertine monoliths of the “Scalinata degli Artisti” (Staircase of the artists).  The “Scalinata degli Artisti” with its sculptures leads to the heart of Cervara. At the center is the idea of a contemporary museum around the theme “Art for Peace”. There is also the physicist and Nobel Prize winner Carlo Rubbia among the numerous signatories of the constituent manifesto, which has the slogan “Promote peace and brotherhood among peoples”.

More than a walk, the itinerary to discover Cervara is a “climb” into the soul of a unique village in the world

Once you arrive at the car park located at the foot of Piazza Giovanni XXIII, leave the car and start climbing towards the heart of the historic center, passing along the Scalinata degli Artisti.  Here are engraved the notes of the score “Notturno-Passacaglia per Cervara” by Ennio Morricone.

A tribute to those who have been touched by the magic of Cervara, such as Ernest Antoine Hébert, Samuel Morse, Ludwig Adrian Richter and the famous Spanish poet Raphael Alberti. Works that alternate between stone houses and aerial views of the green Simbruini landscape, in the silence of the holm oaks.  This brings us to the Museum of the Mountain, which tells the peasant tradition of the shepherds, the religious tradition of the brotherhoods and local art.

It is also possible to follow the exhibition itinerary in English and with the Braille reading system for the blind.

Belongs to the church of Maria Santissima della Visitazione the beautiful bell tower that protrudes from the village like a lighthouse. But to make the most important place of worship precious in the country is also the facade entirely built in local stone, the frescoes in the apse, the seventeenth-century canvas depicting “The Visitation”, attributed to Vincenzo Vanenti of Orvinio, and the body of a martyr kept under the high altar, a gift made by Pope Pius VI to Cervara di Roma.  Along the alleys the art of Hebert and Luisi appears everywhere: landscapes, sacred images, local characters painted on rock and the verses of the poem “Calls me”.

The walk leads to the highest place, the Medieval Fortress, dating back to the first half of the 11th century. Built as a military fortress for the defense of the territory and the sighting of enemies, the fortress around 1200 became the symbol of the power of the Irish Pelagius, a heretical monk who founded Pelagianism. Around the early 1500s the hermitage passed under the ownership of the Colonna family, experiencing a period of maximum splendor, before a slow deterioration.

From here you go down the Scalinata della Pace, the famous triumph of sculptures, totems and artistic testimonies carved in the rock, a connection point that rises from the inhabited center to the remains of the medieval fortress. At this point you can move out of the historic center, in the locality of “Il Palio”, an evocative path that winds through pine and beech woods known as the “Pinewood Path”.   Continuing in the direction of Piazza Giovanni XXIII you arrive at the church of Santa Maria della Portella, built on an old track of transhumance that from Cervara led to Subiaco. Here you can enjoy a beautiful view over the Aniene Valley. Dating from 1702, it houses a beautiful terracotta statue depicting the “Madonna and Child” above the altar. The last stop is Fonte Munistrigliu, the town’s old wash house.

The visit to Cervara ends walking among the stars

The trip to Cervara in Rome, which has the astronomical observatory “Claudio del Sole”, can be concluded with a full immersion among the secrets of the sky. Located in Prataglia place and inaugurated in 2008, it is open through reservations for astrophysics and astronomy enthusiasts, for students and groups. A lens on the sky at an altitude of 1120 meters, offers the opportunity to observe the sun and the galaxies through day and night guided tours by reservation. For info contact Astris Roma (www.astrisroma.org).  In Cervara you eat at km 0. Homemade pasta, beef and truffle. These are the three culinary excellences to be savored as another stop on the enchanting itinerary. In a thousand versions and in a thousand variations, all related to the peasant tradition.

How to get Cervara

By car, the fastest road is the A24 Rome – L’Aquila, exit Vicovaro – Mandela, then via Tiburtina-Valeria to Arsoli, then the scenic provincial road to Cervara. It is 55 km from Guidonia in an hour, 40 km from Tivoli in 50 minutes.  By bus from Rome: from Metro B “Ponte Mammolo”, bus to Subiaco, to Subiaco connection for Cervara. Info at the toll free number 800/150008. By train, from Rome: from Termini station, Rome – Pescara line, Arsoli stop.